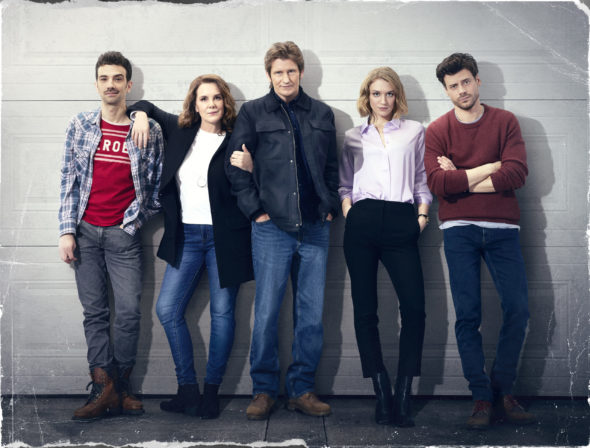 Get ready to spend some more time with The Moodys. The FOX family comedy series is ready to air its second season after a long break and will return in April. Viewers last saw the family at Christmas time in 2019. Denis Leary and Elizabeth Perkins star in this series about the dysfunctional Moody family which follows their ups and downs.

FOX revealed more about the return of The Moodys in a press release.

“Acclaimed comedy THE MOODYS will premiere with two back-to-back episodes Thursday, April 1 (9:00-9:30 PM ET/PT and 9:30-10:00 PM ET/PT) on FOX. The series will then make its time period premiere Thursday, April 8 (9:30-10:00 PM ET/PT). Starring and executive-produced by Emmy Award and Golden Globe nominees Denis Leary (Rescue Me) and Elizabeth Perkins (Sharp Objects), THE MOODYS follows a tight-knit, but slightly dysfunctional, family through their misadventures.

The Moody family includes SEAN SR. (Leary); his wife, ANN (Perkins); and their three grown children – DAN (Francois Arnaud, The Borgias), the youngest of the siblings and the “creative one”; BRIDGET (Chelsea Frei, Sideswiped), the middle sister and the “overachiever”; and SEAN JR. (Jay Baruchel, the How to Train Your Dragon franchise), the oldest sibling and the “failure-to-launch.”

The series picks up with Sean Sr. contemplating retirement – road trips across the country in an RV with Ann, while Sean Jr. takes over the family HVAC business. In reality, however, Ann has no intention of leaving her new psychology practice, and Sean Jr. continues to brew up schemes to get rich quick. Bridget, who is in the midst of a divorce, returns home while her fancy new townhouse is being renovated; and Dan leaves Brooklyn for Chicago to live with his girlfriend, Cora (guest star Maria Gabriela de Faria, Deadly Class), only to realize the relationship is moving too quickly. Once again, the Moodys are all under the same roof. Yep, one big, happy family. Season Two guest stars include Gerry Dee (Mr. D), Josh Segarra (Arrow) and more.”

Check out a preview for The Moodys season two below.

What do you think? Are you excited about the return of this FOX comedy? Do you plan to watch season two of The Moodys in April?

I am SO excited for season 2!! I’ve watched season 1 so many times I’ve lost count. Great family fun. Great writing, even better cast!