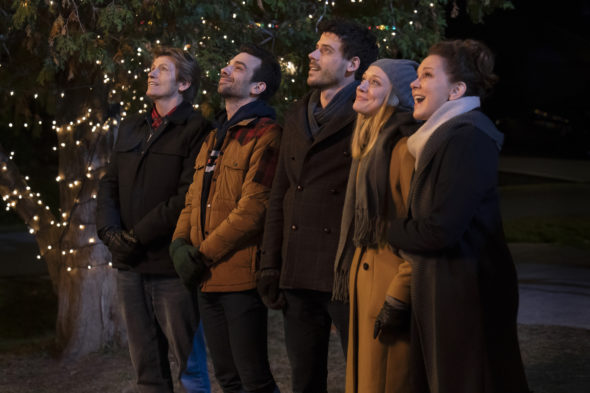 This year, FOX has introduced a new comedy series for the holiday season. The Moodys is described as an “event series” but that doesn’t mean that the show can’t return for a second season if the ratings are strong enough. Will The Moodys be cancelled or renewed for season two? Stay tuned. *Status Update Below.

A single-camera comedy series, The Moodys stars Denis Leary, Elizabeth Perkins, Jay Baruchel, Chelsea Frei, and Francois Arnaud. Based on an Australian TV show, this series revolves around the Moody family of five. They are a tight-knit, though slightly dysfunctional, group that gathers in their hometown of Chicago for the “perfect” holiday. Each Moody has his/her own eccentricities and is also hiding secrets from the other members of the family. Sean Moody Sr. (Leary) and his wife, Ann (Perkins), are parents of three grown children. Freshly single, Dan (Arnaud) is the youngest of the siblings and the “creative one”. Sister Bridget (Frei) is married and the “overachiever” of the clan. Meanwhile, Sean Jr. (Baruchel), is the eldest sibling and the “screw-up” who still lives at home with his parents.

What do you think? Do you like The Moodys TV series on FOX? Should it be cancelled or renewed for a second season?

Renew the show I loved it

I’ve show please renew. The Moody’s are a fun family.

PLEASE bring on Season 2 – Loved all the characters – kooky but fun.