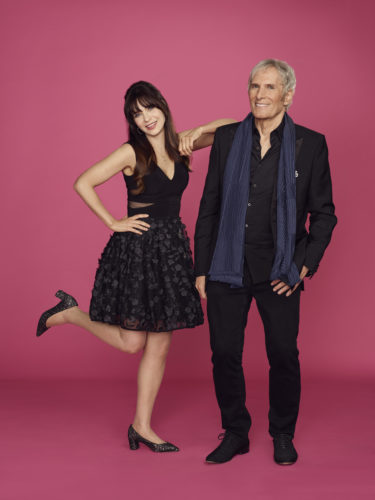 Get ready for a new dating game. ABC has ordered The Celebrity Dating Game, a revival of The Dating Game which first aired on the network in 1965. Various incarnations of the series have also aired in syndication over the years.

This time around, the game show will help celebrities find love out of a panel of three suitors. Zooey Deschanel (New Girl) and singer Michael Bolton are set to host the revival with Bolton also serving as an executive producer.

ABC revealed more about the new game show in a press release.

“Hosted by actress and singer-songwriter Zooey Deschanel and multiple GRAMMY®-winning singer-songwriter Michael Bolton, The Celebrity Dating Game offers a wry wink at modern dating with a star-studded roster of celebrity singles from television, music, comedy, reality TV and feature film in their pursuit to find love.

Offering the same iconic feel as the original classic dating show, each episode follows two celebrities who each pick one lucky suitor from a hidden panel of three bachelors and/or bachelorettes based on answers to a variety of questions. But there’s a twist! The celebrity identities will remain a mystery to their suitors, who are given clues via hilarious parody song performances by host Michael Bolton.

A premiere date was not revealed for The Celebrity Dating Game.

What do you think? Have you watched an earlier version of The Dating Game on TV? Do you plan to watch the new Celebrity Dating Game once it arrives on ABC?

I think this is the worst dating game show I’ve ever seen Please cancel this horrible effort of a show ridiculous is the word I would use … and Michael Bolton looks like he comes from an insane asylum He definately has a good voice but he has a boring personality….he looks so silly just sitting there … I don’t know who put the show together but what were you thinking …

I want to know where she got that black dress! I love it!

I also remember watching the original Dating Game. It was quite good with the questions asked so I’ll give it a try with the singing.

I am old enough to remember watching the first Dating Game. I did enjoy it very much. So I will watch this new one, or at try it once.