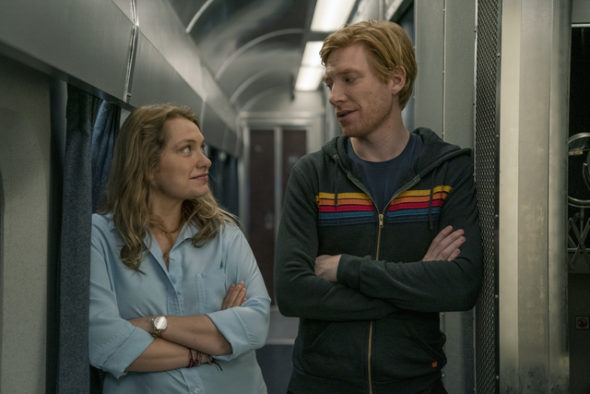 The Run TV series has officially run out of gas at HBO. It’s been confirmed by the cable channel that the romantic comedic thriller series won’t be returning for a second season.

The Run TV show stars Merritt Wever and Domhnall Gleeson, with recurring guest stars Phoebe Waller-Bridge, Rich Sommer, Tamara Podemski, and Archie Panjabi. In college, Ruby Richardson (Wever) and her boyfriend, Billy Johnson (Gleeson), made a pact. They promised that, if either one of them texted the word “RUN” and the other replied with the same, they would drop everything and meet in Grand Central Station and travel across America together. Now, 17 years later, Ruby is shaken out of her humdrum suburban life with that text and she walks away from her ordinary suburb life and flies to New York. There, she reunites with Billy and boards a cross-country train. As their adventure begins, Ruby and Billy fight the tension that still exists between them while attempting to root out each other’s secrets.

As we reported in May, HBO designated the “season finale” as the show’s “series finale” so there seemed to be no question that show was over. However, Run series creator Vicky Jones was still hoping to make a second season.

“After exploring potential ways of continuing Ruby and Billy’s journey, together with showrunner Vicky Jones, we have come to the decision that we will not be moving forward with a second season of Run,” HBO said in a statement.

What do you think? Have you watched the Run TV series? Would you have watched a second season on HBO?

I really really like the show and thought it was different than the average show.

The plot was fun (I enjoyed it) but what was the point of making a season 2 ?

I loved loved RUN! And I’m very disappointed that there will be no season 2! Their chemistry was palpable. Phoebe was her usual hysterical self and it was a very enjoyable ride. SEASON 2 HBO!!!