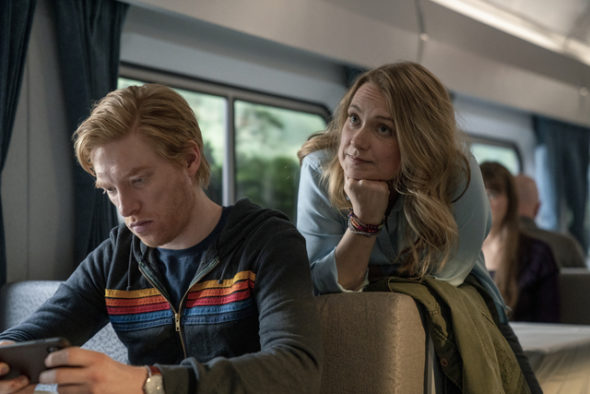 Some 17 years ago, Ruby Richardson (Wever) and her college boyfriend, Billy Johnson (Gleeson), made a pact. They promised that, if either one of them texted the word “RUN” and the other replied with the same, they would drop everything and meet in Grand Central Station and travel across America together.

Years later, on a regular Tuesday morning, Ruby is shaken out of her humdrum suburban life with that text from her ex, Billy. She walks away from her ordinary life in the suburbs and flies to New York. There, she reunites with him and they board a cross-country train.

As their adventure begins, Ruby and Billy fight the tension that still exists between them while attempting to root out each other’s secrets.

Series Finale:
Episode #7 — Trick
With the end of their journey approaching, Ruby and Billy consider their future together. Are they finally being honest with each other? Babe and Laurel are forced together as they follow a new lead.
First aired: June 24, 2020.

What do you think? Do you like the Run TV show? Do you think it should have been renewed for a second season?

Thoroughly enjoyed this show! 2 imperfect people taking a chance on their first love. Every person thinks about this. Please renew!! You left us hanging. Anyone I ask who has seen this show has loved it.

I loved this show. Rewatching it. The scripts are excellent and the actual ng is so high quality. Please renew!!

This had much more potential/promise than it delivered