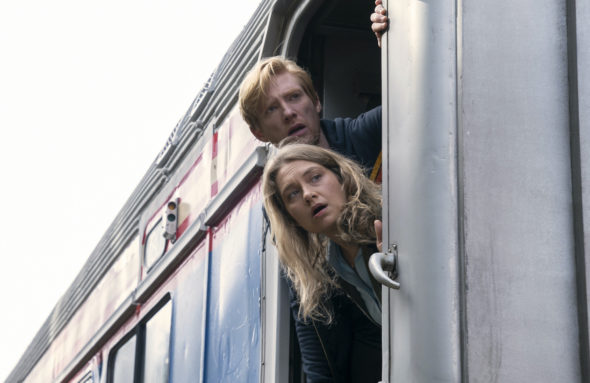 Tonight, HBO airs the first season finale of the Run TV series. Though the cable channel has been quiet about whether the series will return for a second season or not, we now know that Ruby and Billy won’t be back.

The Run TV series stars Merritt Wever and Domhnall Gleeson, with recurring guest stars Phoebe Waller-Bridge, Rich Sommer, Tamara Podemski, and Archie Panjabi. In college, Ruby Richardson (Wever) and her boyfriend, Billy Johnson (Gleeson), made a pact. They promised that, if either one of them texted the word “RUN” and the other replied with the same, they would drop everything and meet in Grand Central Station and travel across America together. Now, 17 years later, Ruby is shaken out of her humdrum suburban life with that text and she walks away from her ordinary suburb life and flies to New York. There, she reunites with Billy and boards a cross-country train. As their adventure begins, Ruby and Billy fight the tension that still exists between them while attempting to root out each other’s secrets.

Airing on Sunday nights since April 12th, the first season of Run has averaged a 0.08 rating in the 18-49 demographic with 236,000 total viewers in the live+same day ratings. The traditional numbers are certainly not impressive and Run is one of HBO’s lower-rated series.

Though HBO’s press release for tonight’s finale (“Trick”) merely designates the episode as the “season finale”, HBO’s site notes that it’s also indeed the “series finale” (see below). While the HBO execs could change their minds and renew the Run series for a second season at some point in the future (ala Big Little Lies), it seems that the seventh installment was designed as the show’s last. 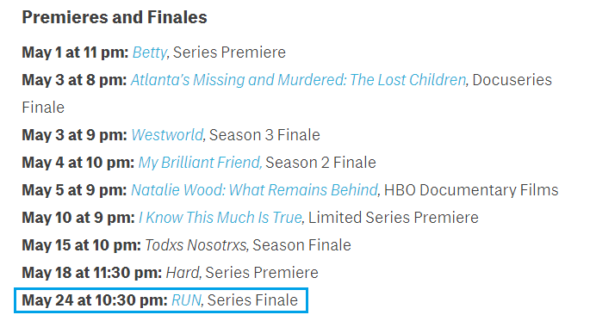 What do you think? Did you watch the Run TV series on HBO? Would you have watched a second season?

Update: The series creator of Run is still hoping for a second season renewal from HBO.

Give us a new series

Please renew! Love the characters and so many possibilities to follow!

I would LOVE to see another season of RUN

I just binge watched this….which I never do….and LOVED this show. It has to come back!!!