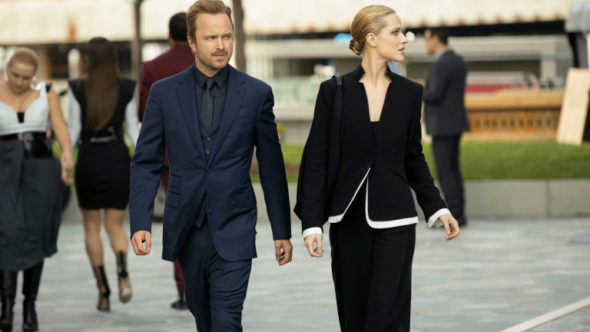 Westworld just wrapped its third season, so what’s next? Recently, showrunners Jonathan Nolan and Lisa Joy spoke with Variety about the future of the HBO TV show.

The thriller unfolds in a pricey, futuristic theme park, where visitors pay to act out their Wild West fantasies while interacting with lifelike robot “hosts.” In the third season, following the Westworld massacre, Dolores, Bernard, and an unknown host begin a new chapter — outside of the park. The cast includes Evan Rachel Wood, Aaron Paul, Jeffrey Wright, Simon Quarterman, Vincent Cassel, Ed Harris, and Tessa Thompson.

In the interview, Nolan addressed the thought we’re all having — is Evan Rachel Wood leaving Westworld? Nolan says hopefully not:

Let me clarify: Dolores is gone. We’re not yet discussing publicly the direction the show is taking, but the fun thing about this show is, you know, from the beginning Lisa and I wanted to make a show that constantly reinvented itself, that could be a different show every season. I think it’s important with a show in which death can be impermanent — these are robots, after all — to mark the occasion with Dolores. That version of that character is gone. We love Evan Rachel Wood and we haven’t [sighs] started talking publicly about exactly what the show looks like going forward. But it looks very different.”

And what about future plans for the HBO series? Is six seasons still the limit? Nolan says the team isn’t quite sure how long the series will last:

Well, I just want to clarify, you know, Lisa and I have never actually talked about a number of seasons. James Marsden mentioned five [seasons] in the first season when we were on hiatus, and more recently there’s been reporting about deals and other stuff like that. But we’ve never actually talked out loud about how many seasons we imagine this thing going, because I think you’d be foolish to. Things change, circumstances change. I think when we sat down to do the show, we didn’t quite realize how difficult it would be to make this show — [laughing] how many years it would take per season. So we’ve never actually talked about how many seasons that plan was, and indeed I think when we had the plan it didn’t actually map out to a specific number of seasons, exactly. It was a beginning, a middle and an end. … When you have a show going like this, you want to stay as long as you’re telling a compelling story. We’re heading towards that end, but we haven’t completely mapped it out.”

What do you think? Do you watch Westworld? How many more seasons do you want?

I love how the new season reinvents itself. I would love to see 6-9 seasons. I absolutely love the character of Maive. Thandie Newton deserves every award for her depiction of her character. Thank you HBO for this reboot of a great movie.

Keep them coming, each episode is like a well made movie so I know they can’t be cheap to make thankyou HBO

6 seasons and a movie!

She can come back as another character