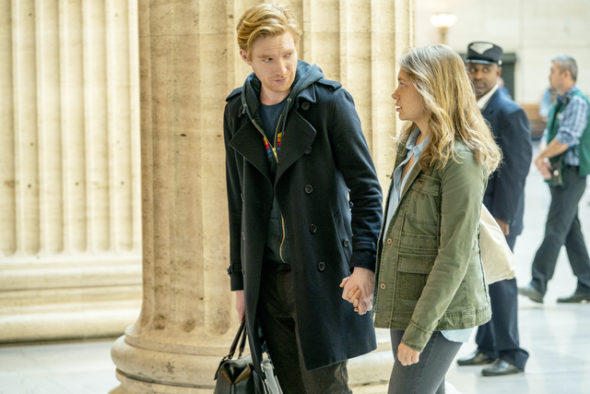 Can you truly run away from your life? Has the Run TV show been cancelled or renewed for a second season on HBO? The television vulture is watching all the latest cancellation and renewal news, so this page is the place to track the status of Run, season two. Bookmark it, or subscribe for the latest updates. Remember, the television vulture is watching your shows. Are you?

Airing on the HBO cable channel, the Run TV series stars Merritt Wever and Domhnall Gleeson, with recurring guest stars Phoebe Waller-Bridge, Rich Sommer, Tamara Podemski, and Archie Panjabi. In college, Ruby Richardson (Wever) and her boyfriend, Billy Johnson (Gleeson), made a pact. They promised that, if either one of them texted the word “RUN” and the other replied with the same, they would drop everything and meet in Grand Central Station and travel across America together. Now, 17 years later, Ruby is shaken out of her humdrum suburban life with that text and she walks away from her ordinary suburb life and flies to New York. There, she reunites with Billy and boards a cross-country train. As their adventure begins, Ruby and Billy fight the tension that still exists between them while attempting to root out each other’s secrets.

The first season of Run averaged a 0.07 rating in the 18-49 demographic and 232,000 viewers. Find out how Run stacks up against other HBO TV shows.

Will HBO cancel or renew Run for season two? My sense is that this show is relatively inexpensive to produce but, based on the ratings, there might not be enough viewer interest for the show to be renewed (or, they wrap up the story at the end of the first season anyway). I’ll update this page with breaking developments. Subscribe for free alerts on Run cancellation or renewal news.

What do you think? Were you hoping that the Run TV show would be renewed for a second season?

Just watched RUN for the second time. It is EXCELLENT. extremely hard to believe there’ll be no Season 2. Really?? What a great show and what great actors and what great chemistry. Why in God’s name would they not take this forward???

The fantasy of running away, the train, the writing, and the hot chemistry between the actors – oh please give us another season!!!

I think this show is so creative. I’m fascinated by the characters and really hope it is renewed. Writing spot on.

Loved This Series So Much!! Please, Please Renew

My wife and I really found this show recently and binge watched the earlier episodes and just finished the finale. Would really would have liked a second season. Sorry the cancellation.

An offbeat wonder. Can’t believe it could be cancelled.

I think it was cancelled 🙁 It’s listed here as the series finale is later this month https://www.hbo.com/whats-new-whats-leaving

LOVE IT and hope it gets renewed.