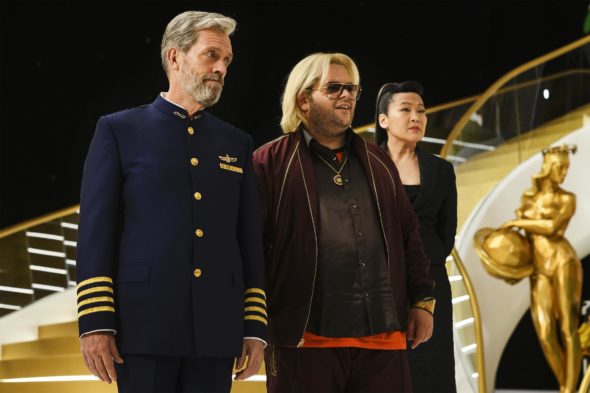 Is this ship the Titanic of the future? Has the Avenue 5 TV show been cancelled or renewed for a second season on HBO? The television vulture is watching all the latest cancellation and renewal news, so this page is the place to track the status of Avenue 5, season two. Bookmark it, or subscribe for the latest updates. Remember, the television vulture is watching your shows. Are you?

Airing on the HBO cable channel, the Avenue 5 TV show stars Hugh Laurie, Josh Gad, Zach Woods, Nikki Amuka-Bird, Rebecca Front, Lenora Crichlow, Suzy Nakamura, and Ethan Phillips. The story is set 40 years in the future when traveling the solar system is a booming, multibillion-dollar business. Ryan Clark (Laurie) is the confident and suave captain of “Avenue 5.” It’s a space cruise ship that features luxury amenities like gourmet buffets, a spa, an observation deck, and yoga classes. When the ship suddenly encounters technical difficulties, it’s up to Ryan and his crew to calm the disgruntled passengers and find a way to deal with unexpected events onboard – though they may or may not be equipped for the task.

Will HBO cancel or renew Avenue 5 for season two? This is a high-profile series from Veep creator Armando Iannucci that stars Hugh Laurie. Sure, the ratings could be higher but HBO doesn’t have to please advertisers, just subscribers. I suspect that the show will be renewed. I’ll update this page with breaking developments. Subscribe for free alerts on Avenue 5 cancellation or renewal news.

What do you think? Are you glad that the Avenue 5 TV show has been renewed for a second season? How would you feel if HBO had cancelled this TV series, instead?