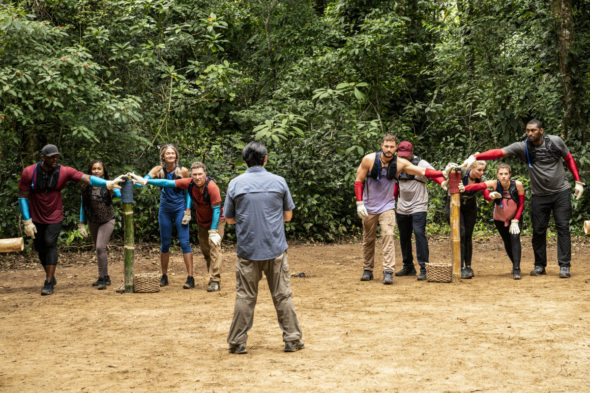 TV show description:
A reality competition series, the Beyond the Edge TV show is hosted by sports announcer Mauro Ranallo.

In the series, celebrity participants try to live for two weeks in the exotic Panama jungle, withstanding torrential downpours, scorching heat, and deadly wildlife. There won’t be any judges or eliminations — instead, each celebrity must rely on their inner fortitude, physical ability, and courage, and have faith in their teammates to endure in the wild.

For each day that they last, and every tough challenge they win with their team, the celebrities raise more money for their charities. If a player reaches their breaking point, they can ring a bell to signal that they are ready to go home.

At the end of the 14 days, the top two earners will go head to head in one final adventure, to see who can become the Beyond the Edge champion and take home the most money for their charity.

Series Finale:
Episode #10 — One More Adventure
The final four celebrities — Craig Morgan, Ray Lewis, Mike Singletary, and Colton Underwood — pay it forward by bringing donations to a local Panama school. Then, the top-earning celebrities partner up for the final adventure challenge, “Pennant Race,” which requires them to climb through a bat cave and pull themselves upside down across a riverbed. In addition to winning an additional $100,000 for their charity, the top-earning celebrity on the winning team will be crowned the first ever winner. Underwood ultimately won the contest.
First aired: May 18, 2022.

What do you think? Do you like the Beyond the Edge TV show? Do you think it should have been cancelled or renewed for a second season?

End Survivor instead….Beyond The Edge was better…..I just lost intrest in CBS because of this decision..

We really have enjoyed Beyond the Edge. Hope it gets more exposure and is renewed for another season.

I thought it was good. Not great, but what can ya expect?
I thought the one guy and the one girl that were “almost” gonna ring the bell to get out of there were ridiculous. For a big guy, he sure is a big baby… he didn’t feel safe? And she was whiney. I guess doing it for charity didn’t mean much to them.
Safe? With all the security & camera people? Give me a break!