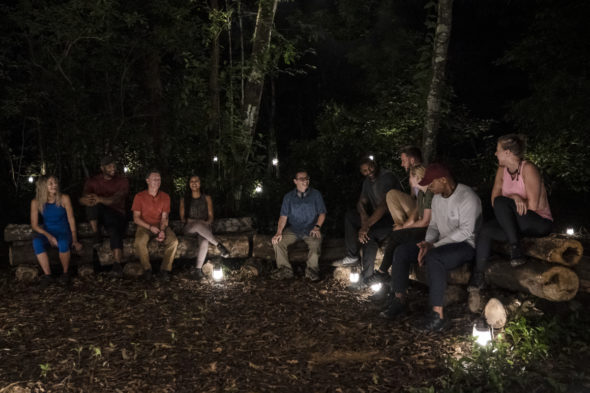 Is there room for two survival shows on the network? Has the Beyond the Edge TV show been cancelled or renewed for a second season on CBS? The television vulture is watching all the latest cancellation and renewal news, so this page is the place to track the status of Beyond the Edge, season two. Bookmark it, or subscribe for the latest updates. Remember, the television vulture is watching your shows. Are you?

Airing on the CBS television network, the Beyond the Edge TV show is hosted by sports announcer Mauro Ranallo. The first season’s contestants are Lauren Alaina, Ray Lewis, Craig Morgan, Metta World Peace, Paulina Porizkova, Mike Singletary, Jodie Sweetin, Colton Underwood, and Eboni K. Williams. In the series, celebrity participants try to live for two weeks in the exotic Panama jungle, withstanding torrential downpours, scorching heat, and deadly wildlife. For each day that they last, and every tough challenge they win with their team, the celebrities raise more money for their charities. If a player reaches their breaking point, they can ring a bell to signal that they are ready to go home. At the end of the 14 days, the top two earners go head to head in one final adventure, to see who can become the Beyond the Edge champion and take home the most money for their charity.

The first season of Beyond the Edge averaged a 0.33 rating in the 18-49 demographic and 2.52 million viewers in the live+same day ratings (including DVR playback through 3:00 AM). While these numbers don’t include further delayed or streaming viewing, they are a very good indicator of how a show is performing, especially when compared to others on the same channel. There can be other economic factors involved in a show’s fate, but typically the higher-rated series are renewed and the lower-rated ones are cancelled. Find out how Beyond the Edge stacks up against other CBS TV shows.

Will CBS cancel or renew Beyond the Edge for season two? This show is reminiscent of Survivor which has been very successful for CBS for decades. It seems relatively inexpensive to produce and there’s likely no shortage of celebrities who are willing to give up a few weeks to appear on a network series. The ratings could be much better but, I think it still has a good chance of being renewed. I’ll update this page with breaking developments. Subscribe for free alerts on Beyond the Edge cancellation or renewal news.

What do you think? Do you hope that the Beyond the Edge TV show will be renewed for a second season? How would you feel if CBS cancelled this TV series, instead?

A great show that highlights teamwork and selflessness while still being a competition. Please bring it back!

Loved the show! Fantastic cast! My daughters and I looked forward to it every week!

Loved Beyond the Edge. The final 4 men were all good guys so would have been happy to see any win but was rooting for Colton. He’s just a genuine, good hearted man (p.s. media needs to stop bringing up that he’s gay…has nothing to do with what kind of a genuine person he is). Would love another season of this show.

Beyond the Edge is way better than Survivor! Our family sure hope it’s renewed for another season and more!!

Jodie sweeten did a hack of a job. Proud of her. Fight until final. With bruiser on both arms and her leg. Knee wrap up. Hurt to bend it. Beat out coach to play for 3 or 4 the. But give it to coach because she okay with slowing herself down. But didn’t want to be the reason why the guy that came in 2nd comes in 2nd having her as an teammate. Regualess of if she would be or not. But she could had made 50,000 more for girl inc. if she won or no more. If lose. This… Read more »

My sister and I love watching this show so hopefully they will be back again for a 2nd season.