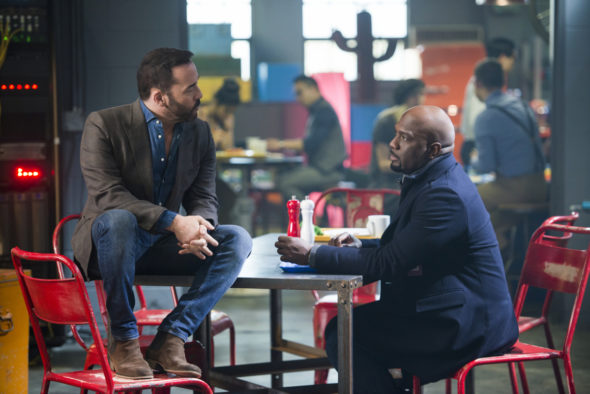 Are a million minds better than one? Is the Wisdom of the Crowd TV show cancelled or renewed for a second season on CBS? The television vulture is watching all the latest TV cancellation and renewal news, so this page is the place to track the status of Wisdom of the Crowd, season two. Bookmark it, or subscribe for the latest updates. Remember, the television vulture is watching your shows. Are you?

A cutting edge crime drama airing on the CBS television network, Wisdom of the Crowd stars Jeremy Piven, Richard T. Jones, Natalia Tena, Monica Potter, Blake Lee, Abigail F. Cowen, and Jake Matthews. After his daughter Mia (Cowen) is killed, Silicon Valley entrepreneur Jeffrey Tanner (Piven) sets out to design Sophe, an online platform for real-time, crowdsourced crime solving. In his fixation to find his child’s killer, Tanner is motivated by the idea that a million minds are better than one. He recruits a crack team and pins all his hopes on harnessing the “wisdom of the crowd,” in order to solve Mia’s murder and as many others as possible. Meanwhile, Tanner’s ex-wife, Congresswoman Alex Hale (Potter), worries about his obsession. Despite their divorce, their profound grief has forged in them an unbreakable bond.

Although it premiered with decent ratings, the numbers have dropped quite a bit. At this point, I suspect that  CBS will cancel Wisdom of the Crowd so there won’t be a season two. I’ll keep an eye on the ratings and update this page with breaking developments. Subscribe for free updates on any Wisdom of the Crowd cancellation and renewal news.

11/27/2017 update: CBS has passed on ordering any more episodes. Although not officially announced, it seems Wisdom of the Crowd has been cancelled after one season. Details here.

4/30/2018 update: As expected, the Wisdom of the Crowd TV show is cancelled after one short season. Details here.


What do you think? Do you hope the Wisdom of the Crowd TV show will be renewed for a second season? How would you feel if CBS cancelled this TV series, instead?

Yes! Bring Wisdom of the crowd back- really loved it. It was a different slant for a crime show-liked the characters as well as the story.

Please bring back Wisdom of the Crowd!!! What an awesome show, with such a different approach. We really got into it and so sad to hear there will be no season 2 🙁

Please bring back Wisdom of the Crowd!
Just kill off Jeremy Pivens caracter, and give Natalie Tena the main role.
I would easily watch WotC , with N.T at the helm of Sofie. I mean, she did invent Sofie, after all, so it only makes sence story wise anyway!
😉

I loved the show and hate when networks end a show without a true ending. You get invested in the story and characters only top never know what happened. SYFY is famous for doing that which is why I don’t watch a series on that channel anymore. Please sry least run a few more shows up tie the story line up.

Bring it back it’s one of the best shows on TV.

my husband and I love the show, please bring back a new series.

CBS, you cancel shows left and right, with no cares of the public who enjoyed them, maybe it’s time we turn away from all of your line ups and watch cable and Netflix instead. Because it’s obvious you don’t give crap about the people viewing. You handle your shows like a politician and I would rather watch tv for enjoyment then take sides. But this! This is just wrong!

We just began watching our recordings of this show. Both my husband and I love it. With each episode it gets better and better. I do hope they continue this show. If not, I hope some other network sees its value.

My family and I have really enjoyed Wisdom of the Criwd. We’d hate to see it cancelled especially before solving the crime and knowing who or why. Praying for more episodes.

It is one of the few shows I plan to watch, I want it to return!

I hope they continue this show. The premise is great and the acting stellar.