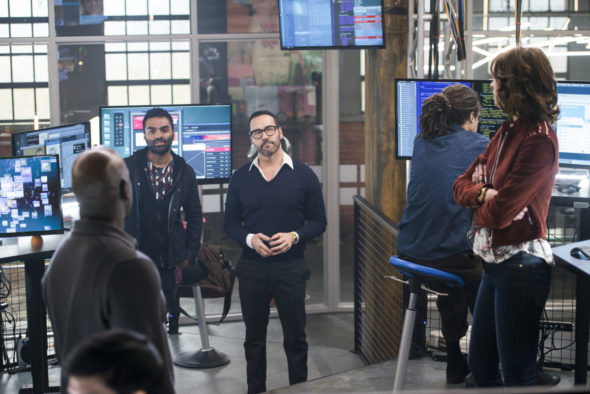 How close does Jeffrey Tanner get to catching Mia’s killer in the first season of the Wisdom of the Crowd TV show on CBS? As we all know, the Nielsen ratings typically play a big role in determining whether a TV show like Wisdom of the Crowd is cancelled or renewed for season two. Unfortunately, most of us do not live in Nielsen households. Because many viewers feel frustration when their viewing habits and opinions aren’t considered, we’d like to offer you the chance to rate all the Wisdom of the Crowd season one episodes here.

A CBS high-tech crime drama, Wisdom of the Crowd stars Jeremy Piven, Richard T. Jones, Natalia Tena, Monica Potter, Blake Lee, Abigail F. Cowen, and Jake Matthews. After his daughter Mia (Cowen) is killed, Silicon Valley entrepreneur Jeffrey Tanner (Piven) sets out to design Sophe, an online platform for real-time, crowdsourced crime solving. In his fixation to find his child’s killer, Tanner is motivated by the idea that a million minds are better than one. He recruits a crack team and pins all his hopes on harnessing the “wisdom of the crowd,” in order to solve Mia’s murder and as many others as possible. Meanwhile, Tanner’s ex-wife, Congresswoman Alex Hale (Potter), worries about his obsession. Despite their divorce, their profound grief has forged in them an unbreakable bond.

What do you think? Which season one episodes of the Wisdom of the Crowd TV series do you rate as wonderful, terrible, or somewhere between? Should CBS cancel or renew Wisdom of the Crowd for a second season? Don’t forget to vote, and share your thoughts, below.

Wish could find a way to continue the show (creative writing like the main character had to take a break from it all and let the team follow the leads). Wish I knew who Mia’s killer was and why he killed her. I do feel the Me Too movement has gone too far hurting too many careers — assumption of guilt — entertainment industry is a complex business of people who behave badly and people who want to succeed at any cost.

I hate that Hollywood condemns people before they are proven guilty. Just because one person is accused, now everyone else on the show and the viewing audience have to suffer. I know you have killed it, but I wish it were coming back.

I love this show! I hope it comes back. I love the fact that everyday people help solve puzzles and I love the diverse cast.

I have enjoyed this show very much. I hope you do not cancel it. The whole idea of Wisdom of the Crowd intrigues me, please don’t cancel it!!

If you are going to cancel the show you could at least let us know who Mia’s killer was!

This is a really good series. We have enjoyed every episode. Good plot and acting. Would be a shame not to renew this.

I’ve really enjoyed this series.It was a great cast, and I love Jeremy Privan. The subject matter is so interesting, and very timely (with what is happening with technology). With so much bad television, it amazes me that they would not renew this wonderful show.

I love Wisdom of the Crowd because it
shows the possibility of people working
together to solve dire problems of
strangers.

I hope this show gets renewed! From the first episode I feel in love with this original show!
The cast is so good together, I look forward to it every Sunday night! It reaches all ages, my 20+ kids love it as well as there parents!

I honestly love Wisdom of the Crowd! Please renew even if a certain character has to be dropped. Please renew!

This TV series is going grow into a really great TV series as it has a lot going for it . This show grew on me about the 3rd episode and now I have to watch it all the time , here in Brisbane, Australia. Great cast for this show and it should be renewed for a second season and more as there is a hell of a lot of stories that could be written for this show to continue for another 10 years or more…

Like it or not we are living in a world of technology and there is no going back. Crowdsourcing, the internet, social media, cell phones, and more have already solved crimes in real time, allowed the sharing of information on missing children and adults, sex trafficking, the innocence project, politics and legislation, grassroots advocacy, racism and more. My son, 27, works in IT in KC, KS and he has enlightened me on the endless possibilities on advancing society through crowdsourcing. I use FB, Google+, Flipboard, Reddit, Twitter, and more myself at 64. I ABSOLUTELY LOVE THIS SHOW.

Please don’t cancel this show, just replace, re-write someone else in for Jeremy Pivins. The show is good.

I do like Wisdom of the Crowd because I would like to see that they caught the killer of Mia.