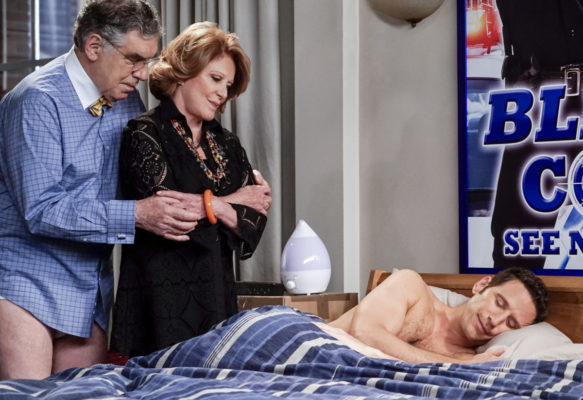 What’s next for 9JKL and Wisdom of the Crowd? Deadline reports CBS has ordered additional scripts for the two freshman TV shows.

Loosely based on the life of Mark Feuerstein, 9JKL centers on newly divorced actor, Josh Roberts (Feuerstein), who moves from Los Angeles, back to his hometown of New York City. The only problem is, his apartment is sandwiched between those of his parents, Harry and Judy (Elliott Gould and Linda Lavin) on one side, and his brother and sister-in-law, Andrew and Eve (David Walton and Liza Lapira), on the other.

Meanwhile, Wisdom of the Crowd stars Jeremy Piven as Jeffrey Tanner, a Silicon Valley entrepreneur who sets out to design an online platform for real-time, crowdsourced crime solving.

This week, sexual harassment allegations were made against star Jeremy Piven and in response, CBS says they are “looking into the matter.” In things go the way they did for Netflix’s House of Cards, Wisdom of the Crowd may be facing a swift cancellation.

What do you think? Do you watch 9JKL and/or Wisdom of the Crowd? Do you think they should be renewed for a second season?

Please bring back Wisdom of the crowd! I love the show. I’ve been watching to see when it is coming back on and then I see where it is canceled! I’m sad.

Wisdom of the Crowd should come back for another season. What has happened to Innocent until PROVEN guilty.

Wisdom of the Crowd can continue without Jeremy Piven. The star is SOPHE, the computer. The rest of the actors and crew (and the audience) should not have to suffer because of a possible indiscretion that Jeremy MAY HAVE committed. The character has a nervous breakdown and his ex-wife and ex-girlfriend continue the hunt for the daughter’s killer. After Jeremy is fully adjudicated the producers can determine if the CHARACTER is worth returning.

I would have liked to see a closure at the end of Wisdom of the Crowd. Something creative, like, they found the person who killed their daughter, and found him (or her) in a new and interesting way.

Love love love 9jkl please keep it going the best one of all is Matt Murray he is hilarious an honestly needs his own new series love him the most!!

Love Wisdom of the Crowd. Hope the Piven allegations aren’t true. 9JKL characters are already over the top and caricatures. Show tries too hard. The bellhop and kid in the lobby? Talk like that to a tenant/owner in the building? Eh.

I love both of these shows!! I hope they make it!!!

I really really REALLY ;like Wisdom of the Crowd. It’s an excellent fresh new idea and I really hope it’s NOT CANCELLED.
Get Jeremy Piven dealt with and KEEP IT ON
9JKL is slow to grow but I think has good possibilities

Love wisdom of the crowd and 9jkl
Hope they both get several new seasons.

I like 9JKL Wisdom of the Crowd not so much