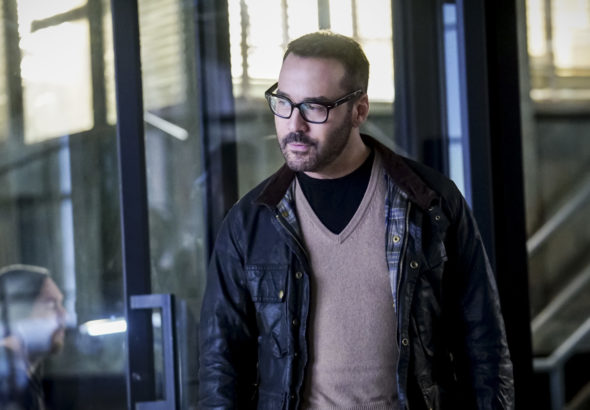 It’s official. CBS has cancelled the Wisdom of the Crowd TV show after one short season of 13 episodes. The writing has been on the wall for this high-tech TV series, since at least November of 2017, when the network declined to order a full season, after news broke of sexual misconduct allegations against star Jeremy Piven.

A CBS cutting edge drama, Wisdom of the Crowd also stars Richard T. Jones, Natalia Tena, Monica Potter, Blake Lee, Abigail F. Cowen, and Jake Matthews. After his daughter Mia (Cowen) is killed, Silicon Valley entrepreneur Jeffrey Tanner (Piven) sets out to design Sophe, an online platform for real-time, crowdsourced crime solving. In his fixation to find his child’s killer, Tanner is motivated by the idea that a million minds are better than one. He recruits a crack team and pins all his hopes on harnessing the “wisdom of the crowd,” in order to solve Mia’s murder and as many others as possible.

The first season of Wisdom of the Crowd averaged a 0.91 rating in the 18-49 demographic and 6.97 million viewers. Its demo numbers were low for a new CBS drama, so the cancellation makes sense. Find out how Wisdom of the Crowd stacks up against the other CBS TV shows.

Wisdom of the Crowd

Amid a CBS investigation into sexual assault around star Jeremy Piven, the network opted to let the rookie drama about a tech innovator who creates a crowd-sourcing hub to help fight crime end after its initial 13-episode order. The series never performed for CBS and ranked as its least-watched show on Sundays. (Wisdom was also a co-production with Universal Television, so the network only had a sliver of ownership on it.)

What do you think? Did you watch the first season of the Wisdom of the Crowd TV series? If it were up to you, would CBS have cancelled or renewed it for season two?

I loved this show. I hate it when a show is cancelled leaving fans in the lurch. Allegations are just that – allegations. Isn’t it innocent until proven guilty. I think they should at least do a movie that wraps up the show and gives it an ending.

I loved this show. Couldn’t wait for the second season to air. This MeToo movement has now hit CBS. I don’t think a new show should be cancelled over it since one of your to executives is now in the spotlight. Please give it another year to pick up. It’s an interesting show.

They do like anyone over the age of 55 liking any of the shows, We are too old for them .Even the Head Man at CBS is being investigated. Lets just cancel him, O I forgot he is above of the actors and human beings. God did not make any one perfect.

It is a shame that the ages that CBS only care about is 18-49 demographic . I am 62 years old and I looked forward to Wisdom of the Crowd. You take a good show and let one person make a sexual charge or unlike the show and by God you cancel it. Why don’t you just take TV shows off the air so no one has to put up with anything that people hate or make up.

I like this show it never fails ya start watching a show and getting into iit and then it’s cancelled. He has been charged with anything what happened to being innocent until proven guilty. Bring the show back!!!!!

Absolutely loved the show-bring it back! Ridiculous to cancel on allegations! The network has NO CLUE!!

Love the show; the network does not have a clue

Love the show; networks don’t have a clue

I loved the show I can’t believe it’s cancelled. Please bring it back.

I really liked the whole show. I was hoping there would be a way to recast it.