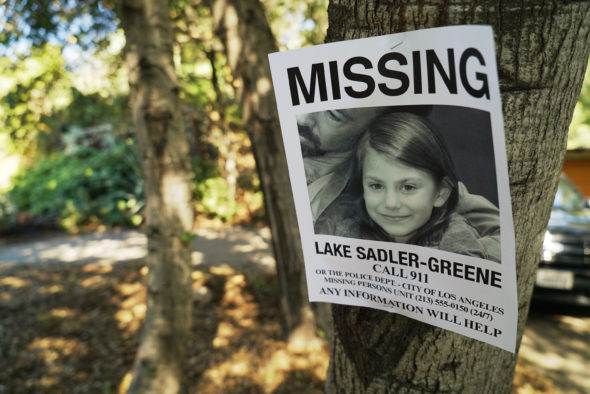 Who took Lake, and will Jane ever get her back? Has the Ten Days in the Valley TV show been cancelled or renewed for a second season on ABC? The television vulture is watching all the latest cancellation and renewal news, so this page is the place to track the status of Ten Days in the Valley, season two. Bookmark it, or subscribe for the latest updates. Remember, the television vulture is watching your shows. Are you?

The character-driven drama centers on Jane Sadler (Sedgwick), a mother and the producer of a new, hot television series. Between her bitter separation from her husband, Pete (Gurry), her demanding career, and parenting as a newly single mom, Jane was already at the breaking point. Now, their daughter, Lake (Pniowsky), has disappeared in the middle of the night. From family and friends to co-workers — no one is above suspicion. Since everyone — including Jane — is keeping secrets, trust is at an all-time premium.

This eight-episode series premiered to very low ratings the numbers got even worse for Ten Days in the Valley. Though word was that the door was being left open for a second season, I think the ratings are just too low for a renewal.  For now, I’ll keep my appetite at bay, train a hungry eye on the Nielsens, and update this page with breaking developments. Subscribe for free updates on any Ten Days in the Valley cancellation or renewal news.

10/26/17 Status Update: ABC has pulled the series off the schedule and will burn off the remaining episodes on Saturday nights in December. There’s no way that they’ll be ordering another season so it’s essentially been cancelled. Details here.

5/12/18 Status Update: ABC has confirmed there will be no season two of Ten Days in the Valley. The show is cancelled, and it is time for me to feast. Details here.

We need more of Ten Days In The Valley.
It was an excellent nail biter, with perfect timing twists.
I barely saw ANY advertisements for it. If I didn’t watch as much TV as the average bear, I would have missed it completely. I know a LOT of people, and NONE of them had heard about it. I think that has much to do with the limited audience it received. PLEASE PLEASE PLEASE bring us more.

I loved the show. Please give us another season. Love Kyera!

Love the show…very sad it was cancelled!

I really liked the show sorry to see it cancelled

I agree with the previous comments. ABC needs to r

I agree with the previous comments. ABC needs to renew the show even if it is on Saturday nights. I am sitting on the edge of my sofa waiting for the next show. I love Kyra Sedgwick

Please do not cancel this show. I looked forward to it every week,I am a fan of Kyra Sedgwick. It seems whenever a show has a good story line it is cancelled.

I looked forward to this show every Sunday night. I couldn’t find it on the computer TV listings and then read that it was going to be cancelled for low ratings. I loved it – especially as Kyra Sedgwick was the star (The Closer) and hate that it’s being cancelled. I will buy the DVD. I very much hope that they will – at the very least – end the show and not leave it hanging with no resolution. I don’t usually watch any shows that I care if I miss an episode and this is the one that I… Read more »

Please don’t cancel this show. I love it want to see more. Kyra Sedgewick is a great actress. Please kept this show on.

Please don’t cancel ten days in the valley. Its a new different fresh story line. Tired of “shoot an ups”. Kyra Sedgewick is so convincing in this. Keep it !!!

Do not leave us with an unfinished show. Kyra Sedgwick deserves to be brought back.
One of the best shows of the season !
There are not many good shows this season, this one shone.

Renew the show it is good!

Ten Days In The Valley Should definitely Be Renewed For A Second Season. Kyra Sedgewick is great in this role. Canceling after only one season does not give ABC or Kyra Sedgewick a fair chance to make this show as good as The Closer was.