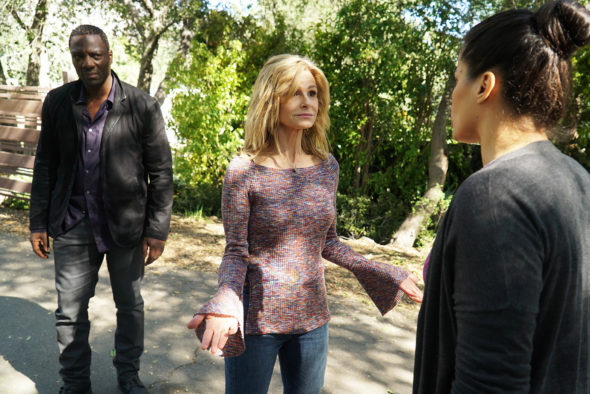 Things don’t look good for Ten Days in the Valley. Deadline reports ABC has pulled the freshman TV show from its Sunday-night timeslot.

Effective immediately, Ten Days in the Valley will no longer air on ABC on Sunday nights as it has been for the past four weeks. Instead, the show will take a break and return on Saturday, December 16th, at 9 p.m. ET/PT with back-to-back new episodes.

The schedule shift suggests ABC is leaning towards cancelling the low-rated series. Currently, Ten Days in the Valley is averaging a .44 in the 18-49 demo and only 2.714 million viewers, making it the network’s lowest-rated series for the 2017-2018 season so far.

What do you think? Are you watching Ten Days in the Valley? Do you think it should be renewed?

I thought season 1 was great! The 1rst half of the 2nd season I didn’t think was very good but continued to watch it anyway. I am so glad I did! These writers were beyond creative! Can’t wait to see season 3. I hope season 3 is as good as the 2nd half of season 2.
Not only the writers but the actors in this show really make it entertaining! Can’t wait!!!

Yes! Please bring it back, find a better time or better promoting. Its a good show!

I think you should put this on a different night, like Monday. Their are a lot of shows that are not that good in my thoughts on Monday or Friday nights. I watched til the 10 episode and it is still in the air. We are not truly clear to who was all involved nor the connection to the dead witness in witness protection. The story line is good but a lot you have to put together.
Kyra Sedgwick is great as usual and John Bird character is very good ! DO NOT CANCEL

It’s an interesting drama with several talented actors. I watched a marathon to catch up. Well worth it.

Yes great drama would love to see a season 2 etc.its good to see a new show that isn’t a medical show or a show about doctors !

Worst show ever. And that’s saying something.

It needs to go. It is too slow moving, predictable.