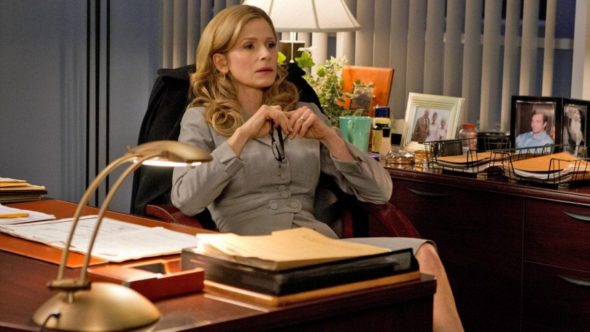 Bittersweet news for fans of Ten Days in the Valley. TVShowsonDVD reports the freshman ABC show will be released on DVD days before its series finale.

As reported earlier, ABC effectively cancelled Ten Days in the Valley when they pulled the show from its Sunday-night timeslot last month. The series’ remaining episodes will air on Saturdays beginning December 16th at 9 p.m. ET/PT.

Fans can purchase all 10 episodes of the show on DVD and Blu-ray on January 2nd. The final two episodes are expected to air on ABC on January 6th.

Overworked television producer Jane Sadler’s life is turned upside down when her daughter goes missing, setting off an investigation where everything is a mystery and no one can be trusted. After her award-winning documentary brings down the San Diego Police Department, television producer Jane Sadler turns her storytelling talents to fiction and launches a new television cop drama. But the pressures of balancing her demanding career, dealing with a messy divorce, and being a devoted single mother start to take their toll.

When her daughter goes missing and the LAPD starts to investigate, Jane’s world quickly begins to implode. Just like her controversial police TV show, everything is a mystery, everyone has a secret, and no one can be trusted. Cast: Kyra Sedgwick, Emily Kinney, Adewale Akinnuoye-Agbaje, Malcolm Jamal-Warner, Felix Solis, Harry Katzman, Kick Gurry, Abigail Pniowsky, Ali Liebert.

ABC began airing Ten Days in the Valley – A 10-Part Limited Series in October, but after the first 4 episodes had aired weekly on Sundays throughout that month, the network decided to delay the remaining episodes until mid-December. You can expect them to air on Saturdays, with two being shown on December 16th, then one each week until January 6th, when the final two episodes will be broadcast.

But you can own this show by then! Starring Kyra Sedgwick (The Closer), Emily Kinney (The Walking Dead; Conviction), Adewale Akinnuoye-Agbaje (Lost, Oz), Malcolm Jamal-Warner (The Cosby Show, Malcolm & Eddie), and others, Lionsgate has informed retailers that Ten Days in the Valley – A 10-Part Limited Series will be available on DVD (3 discs; $24.98 SRP) and high-def Blu-ray (2 discs; $24.97 SRP) on January 2nd). Both versions will include English SDH subtitles.”

What do you think? Have you been watching Ten Days in the Valley? Would you buy the show on DVD or Blu-ray?

I am still mourning the loss of this show that to me was the most relatable for women who feel unbearable pressure daily – in raising and protecting their children, in facing the ugliness of a broken marriage, in fighting battles at their workplace and their community, while trying to protect their own health and simply the order of their own households. Why eliminate a show that is emblematic of the life of the average American woman!?! I protest this decision, but am powerless.

The series is still airing in France (on OCS) without any break.
Last episode planned for mi-december.

I really love the show. I can’t wait for it to return.

Completely dumbfounded that a program of this type would be canceled a couple of shows before the end. This might not have been the best mystery show ever, but at least would have been shown in entirely on cable.