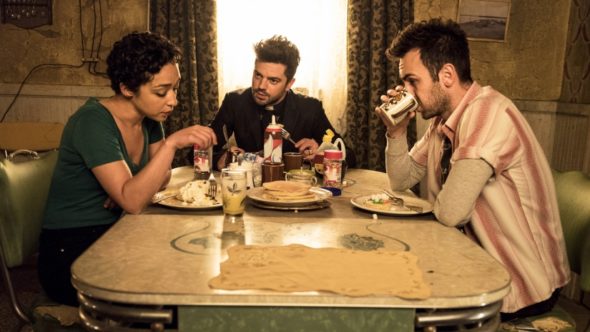 On Twitter, executive producer Seth Rogen announced AMC has indeed greenlit a third season of Preacher. The show will return in 2018.

What do you think? Do you watch Preacher? Are you glad it’s been renewed?

Very happy Preacher has been renewed for a 3rd season. Keep’em coming!!!

The first season was really good. That’s why I sat through the second. It just lost something this year, maybe it’ll get it back next year. But if not then it’s definitely toast because obviously I’m not the only one who noticed that.

Oh no. I was hoping I would not feel obliged to sit through this bad show. It is like a car wreck. It was terrible, but for some bizarre reason, I kept coming back. I think it is because there is not much else to watch in summer.