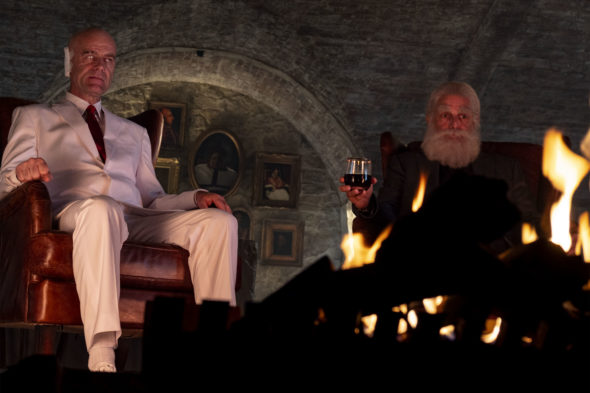 Does the fourth season of the Preacher TV show on AMC wrap up the story in a satisfying way? As we all know, the Nielsen ratings typically play a big role in determining whether a TV show like Preacher is cancelled or renewed for season five. Unfortunately, most of us do not live in Nielsen households. Because many viewers feel frustration when their viewing habits and opinions aren’t considered, we’d like to offer you the chance to rate all of the Preacher season four episodes here.

What do you think? Which season four episodes of the Preacher TV series do you rate as heavenly, hellish, or plain old mundane? Is this the right time to end this TV show? If it were your call, would AMC cancel or renew Preacher for a fifth season? Don’t forget to vote, and share your thoughts, below.

How very disappointing! Here I thought I had finally found ‘the’ perfect show. Action, blood, adrenaline, sex; the dry humour notwithstanding. This storyline shares dogma with crazy, that’s what made it so addictive!
Bring it back!

I love this show! One of the best death scenes ever was just 3 rd episode. I hope to see more from this and actors are fabulous. I hope there is more to come.

Preacher is my most fave TV series ever! Whilst season 4 was AWESOME it left me feeling like I had lost something in my life due to the fact that it was clearly the final season.
The cast, writing and characters were just fantastic and it’s a one in a million chance that there’ll be another gem like this for a few years. The last TV series that was a little gem for me was ‘The Lost Room’ 1 season only but really good and had a lot more to give, check it out.

Oh wow
!!! The best season yet the existential
Questions !! The philosophical questions and statements are really overwhelming one of
The cleverest shows ever written .!! And that’s just the story the Acting and talent.with superb carting makes this show plume no other xxxxx to everyone who made it happen

Will definitely miss this show. LOVE the cast and writing.

Preacher has been an incredibly fun series to watch, very entertaining, and with lots of laughs to boot. I am going to dearly miss it 🙁

I never watch The Preacher… doesn’t interest me at all!

How can you claim something ‘doesn’t interest you’ when you have never watched it?
At least if you had taken the time to watch, your opinion might be more valid.