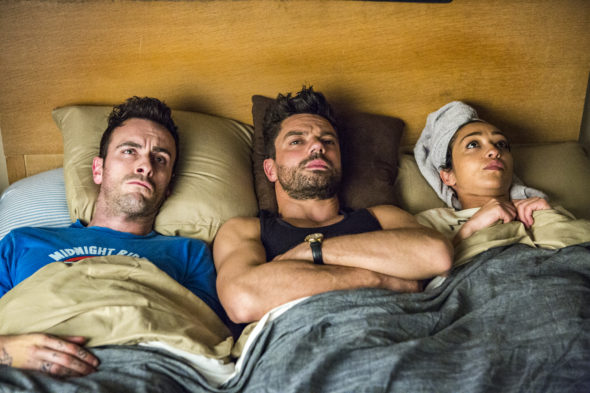 Preacher is back in action. AMC has just released a new teaser for the TV show’s season three debut.

Season three of Preacher premieres on AMC on June 24th at 10 p.m. ET/PT.

AMC’s outrageous drama “Preacher” returns for 10 episodes on Sunday, June 24 at 10:00 PM ET/PT, and the network just released a fiery new promo raising the curtain on our sinister cast of characters including Jesse, Cassidy, Tulip, Gran’ma, Allfather, God Dog, and many more.

“Preacher,” is a dramatic thrill ride that follows West Texas preacher Jesse Custer (Dominic Cooper), his badass ex-girlfriend Tulip (Academy Award(R) nominee Ruth Negga) and an Irish vampire named Cassidy (Joseph Gilgun) as they embark on a road trip to find God and are thrust into a twisted battle spanning Heaven, Hell and everywhere in between.

In Season 3, Jesse Custer’s quest for God takes him back to the place he’s been avoiding his whole life: home. Jesse, Tulip, and Cassidy return to Angelville, the Louisiana Plantation where Jesse was raised, and find old grudges and deadly obligations await them. With the help of his friends — and a few enemies — Jesse will need to escape his past… because the future of the world depends on it.

Can’t wait for the freaking awesome Betty Buckley to join this cast. Waiting to get the DVR set as to not miss an episode.

I stopped watching halfway through the second season.
Liked the first season though, surprised Negga is back because supposedly she, and Cooper ended their relationship.