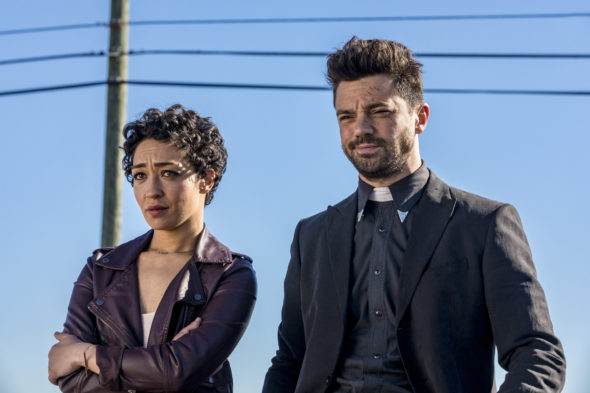 The end is nigh for Preacher. Executive producer Seth Rogen just announced the premiere date for the AMC TV show’s fourth and final season.

Based on the comic by Garth Ennis and Steve Dillon,  the series centers on West Texas preacher Jesse Custer (Dominic Cooper), his badass ex-girlfriend Tulip (Ruth Negga), and Irish vampire Cassidy (Joseph Gilgun) on their road trip to find God.

The fourth and final season of Preacher debuts on AMC on August 4th.

Take a look at the announcement below:

What do you think? Do you watch Preacher? Are you excited for the final season?

Seth, have you lost your mind? The best show to come out in ages and you’re gonna axe it?? Please reassess this idea and let it run on. Thanks for your creativity… Nana..

Way to kill the best TV show yet again.

SAY IT ISN’T SO Don’t do it I eat and breathe “PREACHER’ what is a girl to do?I always see something new with Preacher I know that the Producers Garth,Rogen, and other guy haven’t ran out of ideas. PREACHER PREACHER

I check the list every week. Pray that I never see the end of Preacher. This show has absolutely been my joyful escape from the gray life of work and dishes. Rinse and repeat. Please! This show has such open topics surely you can stretch it a little longer! K

leave preacher on good for the brain

SO DISAPPOINTED AMC cancelling INTO THE BADLANDS & PREACHER. Both were awesome funky fantasies that certainly ended before their time. Gotta wonder who’s minding the store?

I CANNOT BELIEVE YOURE ENDING PREACHER SO SOON! I LOVE THAT SHOW! TERRIBLE DECISION!

AMC is ending Into The Badlands, and now they are ending Preacher. 2 ridiculously stupid decisions. Shame on them.

Yipee! Excited to have another season of this freakin unique show!