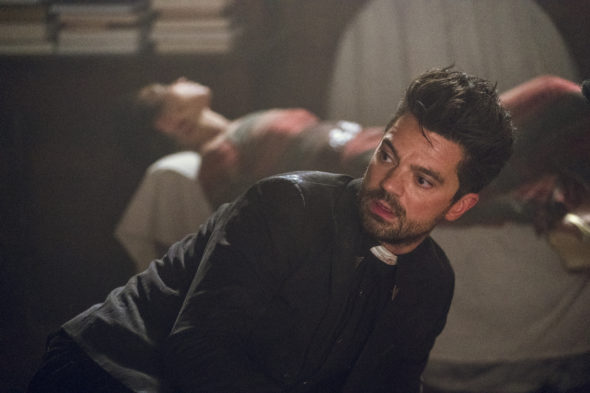 Have fans’ prayers been answered? Is the Preacher TV show cancelled or renewed for a fourth season on AMC? The television vulture is watching all the latest cancellation and renewal news, so this page is the place to track the status of Preacher, season four. Bookmark it, or subscribe for the latest updates. Remember, the television vulture is watching your shows. Are you?

The third season of Preacher averaged a 0.25 rating in the 18-49 demographic and 854,000 viewers. Compared to season two, that’s down by 39% and 27%, respectively. Learn how Preacher stacks up against other AMC TV shows.

Will AMC cancel or renew Preacher for season four? The ratings are way down but the series is still doing pretty well for an AMC series. I suspect it will be renewed but Preacher could easily be cancelled instead. I’ll keep a hungry eye out and will update this page with breaking developments. Subscribe for free Preacher cancellation or renewal alerts.

11/28/18 update: Preacher has been renewed for a fourth season. Details here.

What do you think? Are you glad that AMC has renewed the Preacher TV show for season four? How would you feel if AMC had cancelled this TV series, instead?

I stopped watching after I saw what they did with Jesus. I did not like how they portrayed God either.

I think AMC renewed Preacher. I saw the DVD for season 3 at my local Walmart and there’s a sticker on the box saying “New episodes coming 2019”

I feel so unresolved. Please don’t leave me in suspense!

My favorite show ever. I sure hope for a good long run. Let’s get a season 4!

If you want to see Preacher renewed, as I do, please read this post and than help get #RenewPreacher trending Ratings on Preacher season 3 were .25 in the 18-49 target demographic, which were quite down from season 2’s ratings. Season 2 closed out at .40 in the 18-49 target demographic. Still , Preacher’s season 3 ratings are not bad ratings for AMC overall. Season 4 averaged at 4th in the target demographic, and sixth, overall.That said, there is some cause for concern, IMO. If you want to see more Preacher, hedging the odds is a good move. Copy and… Read more »

Please renew the preacher. Everytime I start to watch a good series they cut it off before the end. That is so annoying. It always happens to the best shows ever. And the preacher is in that category of the best series ever.

Love the show. Binge watched all 3 seasons. Really want to see what Starr has planned and watch Tulip kick a**.

I would be so, so upset if this series got cancelled! I got to it late (after even the third season’s finale) on the recommendation of a friend and I am so sad I missed it before now. I’ve watched everything through three times since then to catch every little detail. Please renew it!