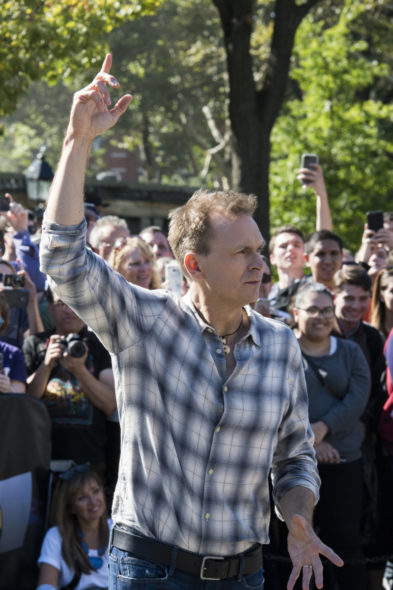 Is the finish line in sight? Will The Amazing Race TV show be cancelled or renewed for a 31st season on CBS? The television vulture is watching all the latest TV cancellation and renewal news, so this page is the place to track the status of The Amazing Race, season 31. Bookmark it, or subscribe for the latest updates. Remember, the television vulture is watching your shows. Are you?

A reality TV series competition airing on the CBS television network, The Amazing Race is hosted by Phil Keoghan. It once again features 11 pairs of contestants racing around the world in pursuit of a million-dollar prize. From the starting line in New York City’s Washington Square Park they’ll set out for Iceland, to traverse a canyon above the Geitargljufur River. In all, the racers will visit 10 countries and 21 cities across 29,000 miles, in their quest to cross the finish line.

The 30th season of The Amazing Race averaged a 1.15 rating in the 18-49 demographic and 5.51 million viewers. Compared to season 29, that’s up by 39% and 37%, respectively. Find out how The Amazing Race stacks up against the other CBS TV shows.

Over the years, the ratings have dropped quite a bit, and it took until the May Upfronts for the series to eke out a 30th cycle renewal. Still, I’d think if the network was ready to let it go, they’d already know that, and would capitalize on a “30th and final season racing toward the finish line” marketing campaign. I think that a 31st season will air next season. I’ll update this page with breaking developments but I expect a renewal. Subscribe for free alerts on The Amazing Race cancellation or renewal news.

What do you think? Are you glad that CBS has renewed The Amazing Race TV show for season 31? How many more seasons do you think this TV series has in it?

This show used to be great and a must view. Now it’s devolved into a mix of hot garbage and “hey look at me” personalities buoyed by seasons of stunt casting. In an attempt to draw demographic away from other platforms, CBS managed to kill an otherwise entertaining show. Please go away and don’t ever come back.

When is the fall Amazing Race starting?

Amazing race had a good run. Wouldn’t miss it if it never came back…

This is one of the BEST shows on TV – please don’t cancel it!

Do not cancel. This is the BEST SHOW EVER!!!

Please do not cancel Amazing Race – best show ever

Do Not Cancel. Love the show. Seen it from the beginning.