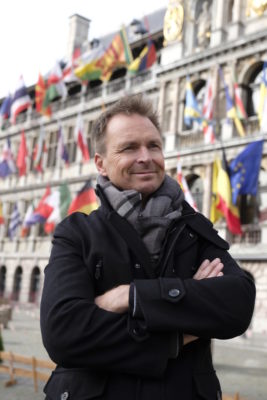 CBS is taking every precaution when it comes to the coronavirus. Deadline reports the network has shut down production on season 33 of The Amazing Race.

According to Deadline, CBS has paused production on season 33 of The Amazing Race because of concerns about the coronavirus. You can read the network’s statement below:

Due to increased concerns and uncertainty regarding the coronavirus around the world, CBS and the producers of The Amazing Race have taken the precautionary measure of temporarily suspending production on the 33rd season of the series. All contestants and production staff are in the process of returning home.

At this time, no Racers or anyone on the production team traveling with them have contracted the virus, or shown symptoms, and we are not aware of anyone being exposed to it.

Out of an abundance of caution, everyone involved in the show will continue to be monitored when they return home. The health and well-being of the Racers and the production team are our top priorities.”

What do you think? Do you watch The Amazing Race? Do you think CBS made the right move?

I am disappointed that filming of TAR 33 has been halted due to the coronavirus fears. Eight months have passed by, and the production of TAR 33 will be likely to restart sometime in the first week of March 2021 and re-do the legs in England and Scotland. The teams will have to recast including with some have asking to return for a production once again.

As an avid Amazing Race fan for the last 5yrs, I think CBS has made the right choice to halt production on the 33rd season of The Amazing Race until further notice. Its better to be safe than sorry, I’m also glad the film crew and the teams are ALL safe and virus free.

Good for CBS! Can’t be too careful when it comes to health issues. We love the show and hope it will be able to return to production soon.

I have never missed and episode of Amazing Race, Survivor or Big Brother. I commend you for pausing Amazing Race. I will patiently wait until things get back to normal reference the Corona virus.

I love watching the Amazing Race and am disappointed in hearing that’s is held in limbo for now but totally understand and support their decision to do that.

I watch every episode! Glad to know CBS is looking after the health and well-being of all involved. Kudos to CBS!

Best thing to do for safety of all.

I believe it is in the best interest of the cast and crew of the show.

I love the show. But the safety of everyone involved is more important to me. Right thing to do!

I think its extremely considerate of the producers to consider the contestant and company’s safety. It’s a big loss to them but kudos for considering all involved.

I believe they did.But I really hope it comes back it’s my favorite show

I love THE AMAZING RACE, but I certainly do understand that everyone should take all the precautions that are necessary at this time. I look forward to its return.

Probably a very wise thing to do

Oh no!!! I did not feel threatened by the Corona virus until now!! I really get why they made the call though, as long as they promise to air season 32!! And I hope with all my heart that putting off season 33
doesn’t mean mean a death sentence!!! Amazing race we love you!!! Please don’t ever go away! …it is our family’s most favorite show and we wait allllll year for it to come back!!

It is not a Death Sentence for this show. They are just being careful for everyones safety and health. I would rather wait a year or two for a new season then them go through with Season 33 and potentially have everyone racing get sick. I like the show and so do others and we all will wait it out. I Hope Amazing Race Australia and Canada Does the Same Thing and Shuts Down Production until The Covid-19 thing is Contained and Cured. I also Hope other Production Companies that do this Type of show also Shut Down. No need… Read more »