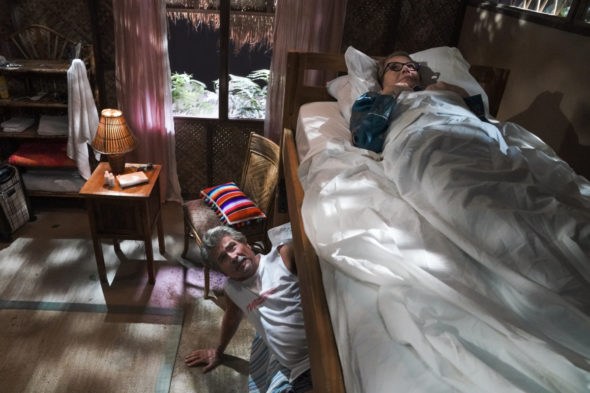 Have the Shorts come up short? Is the Life In Pieces TV show cancelled or renewed for a fifth season on CBS? The television vulture is watching all the latest TV cancellation and renewal news, so this page is the place to track the status of Life In Pieces, season five. Bookmark it, or subscribe for the latest updates. Remember, the television vulture is watching your shows. Are you?

The fourth season of Life in Pieces averaged a 0.68 rating in the 18-49 demographic and 4.71 million viewers. Compared to season three, that’s down by 38% and 27%, respectively. Find out how Life In Pieces stacks up against the other CBS TV shows.

Will CBS cancel or renew Life in Pieces for season five? Though the ratings are down, I think it will get a renewal. I’ll keep an eye on the Nielsens and update this page accordingly Subscribe for free updates on any Life In Pieces cancellation or renewal news.

5/10/19 update: CBS has cancelled Life in Pieces so there won’t be a fifth season.

What do you think? Are you sorry that the Life In Pieces TV show hasn’t been renewed for season five? Should this series have been cancelled?

Say it isn’t so! Seriously! I love this show and wondered what happened. I haven’t had a show Make me laugh this hard since Friends! I just can’t believe people weren’t watching! Seriously Folks, most comedies just aren’t funny anymore and they’re very sloppy with the writing and the vulgarity! But this show was hilarious! And somewhat family friendly. I guess my tastes are the minority! Sad…..

I may be late to the game of “Life In Pieces” but just finished all four seasons and WOW!, what a shame there won’t be more episodes!!!!

Shame on CBS and any other network for not picking it up!!!!

It was happy and uplifting! God forbid that happen on TV!!!