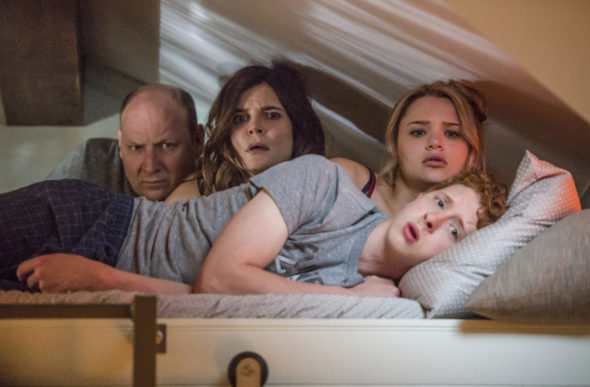 Do the Shorts play the long game during the third season of the Life In Pieces TV show on CBS? As we all know, the Nielsen ratings typically play a big role in determining whether a TV show like Life In Pieces is cancelled or renewed for season four. Unfortunately, most of us do not live in Nielsen households. Because many viewers feel frustration when their viewing habits and opinions aren’t considered, we’d like to offer you the chance to rate all the Life In Pieces season three episodes here.

What do you think? Which season three episodes of the Life In Pieces TV series do you rate as wonderful, terrible, or somewhere between? Should CBS cancel or renew Life In Pieces for a fourth season? Don’t forget to vote, and share your thoughts, below.

This show is proof that you do not need a laugh track or live audience to encourage viewers to find anything humorous. I literally laugh so hard my stomach hurts practically every episode! The cast has such a chemistry with each other (I have often wondered just how much dialogue is scripted and how much is ad-libbing as the actors’ conversations really blend together), the writing is unique, and the directing is on-spot. If I had any pull, this series would be renewed for minimum 10 years 🙂

Keep this show. It’s funny and I love each of the characters.

please renew this very funny family’s show! I particularly love watching my daughter Zoe play Jen but also love the other characters…and actors.. Dianne W. and Jim Brolin, Colin Hanks and Angelique Cabral to name just four! (I’d like the poodle to come back, but that’s cuz i love poodles and that one was particularly adorable.)

Please don’t cancel this show!!! I laugh every episode. Seriously love this show!

Unique way of presenting the storylines..very funny show..love all the characters

Please renew! This is the only CBS show I watch. I love Life in Pieces!

Absolutely love love LIFE IN PIECES!!! Very disappointing that they made it a 1/2 from the hilarious hour it was….. PLEASE DON’T CANCEL!!!!

Hate it can not compare with Young Sheldon, mom, the modern family
today episode was bore nothing to laugh about