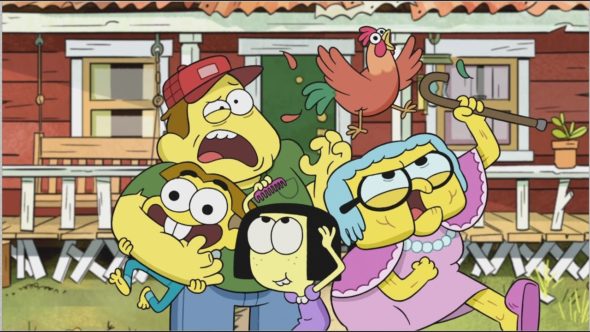 Disney Channel is all in on Big City Greens. Recently, the network announced they’ve ordered a second season of the upcoming TV show.

The animated comedy series centers on “a mischievous and optimistic country boy who moves to the big city with his wildly out of place family.”

Disney Channel has ordered a second season of animated comedy-adventure series “Big City Greens,” about a mischievous and optimistic country boy who moves to the big city with his wildly out of place family, ahead of its series debut, MONDAY, JUNE 18 (9:30 a.m. EDT/PDT), on Disney Channel, DisneyNOW and Disney Channel VOD. The series hails from comic book creators and brothers Chris and Shane Houghton (“Harvey Beaks”) and influenced by their childhood growing up in the small rural town of St. Johns, Michigan, with many of the locations and characters inspired by their real-life family members and townsfolk.

Eric Coleman, senior vice president, Original Programming and general manager, Disney Television Animation, said, “Drawing upon their personal experiences, Chris and Shane have created a ‘fish-out-of-water’ series that consistently delivers stories with big laughs and plenty of heart. We’re eager for viewers to get to know the tight-knit Green family and their endearing relationships that will be universally appealing to kids and families.”

The series premieres with a week of new episodes rolling out daily, Monday, June 18 – Friday, June 22, as part of Disney Channel’s GO! Summer that super-serves kids and families all season with new programming. Following the debut week, new episodes will premiere throughout the summer on Monday and Wednesday mornings (10:00-10:30 a.m. EDT/PDT). “Big City Greens” shorts will begin rolling out Saturday, June 16, on Disney Channel and Disney Channel YouTube. Coinciding with the series premiere, the DisneyNOW app will also unveil its first multi-player game “Big City Battle!,” where players compete against each other to earn their place as members of the Green family.

“Big City Greens” follows the offbeat adventures of 10-year-old Cricket Green, whose natural curiosity and enthusiasm lead him and his family – older sister Tilly, father Bill and Gramma Alice – on epic journeys and into the hearts of his new neighbors.

What do you think? Are you a fan of Disney’s animated series? Will you watch Big City Greens?