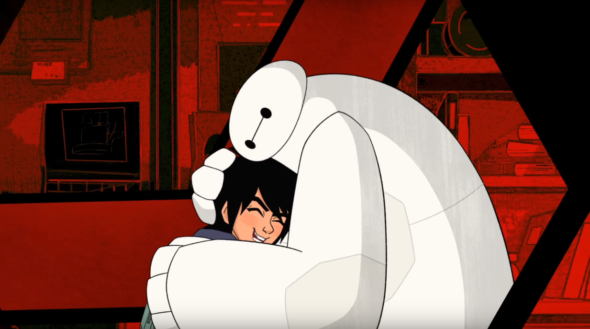 Based on the 2014 film, the animated series picks up after the events of the movie and follows the continuing adventures of tech prodigy Hiro and his cutting-edge robot, Baymax. The voice cast includes Maya Rudolph, Jamie Chung, Ryan Potter, Scott Adsit, Alan Tudyk, Genesis Rodriguez, and David Shaughnessy.

Big Hero 6 The Series premieres on Disney Channel and Disney XD with the TV movie Baymax Returns on November 20th at 8 p.m. ET/PT.

Set in the fictional city of San Fransokyo, “Baymax Returns” explores the moment in Walt Disney Animation Studios’ Academy Award(R)-winning feature film after Hiro believes that his compassionate, cutting-edge robot Baymax is lost in the portal forever and discovers the chip his brother Tadashi designed to create Baymax. 14-year-old tech genius Hiro begins school as the new prodigy at San Fransokyo Institute of Technology and sets off to rebuild Baymax, but his overconfidence and penchant for taking shortcuts leads him and the newly minted Big Hero 6 team – Wasabi, Honey Lemon, Go Go and Fred – into trouble.

The series, which will debut in early 2018 on Disney XD, continues the adventures and friendship of Hiro, Baymax and the Big Hero 6 team, picking up immediately following the events of the feature film. Beginning Friday, November 24, “Big Hero 6 The Series” shorts will roll out every Friday for six consecutive weeks on Disney XD, the DisneyNOW app and Disney XD YouTube. The TV movie, series and shorts will roll out through 2018 on Disney XD channels and Disney Channels worldwide.

What do you think? Are you a fan of the movie Big Hero 6? Will you watch the new Disney series?

I really loved the film, it was a sweet and somewhat sad story. I have no siblings of my own, so it’s very hard for me to fully understand the feelings in a relationship between brothers, between sisters. But, I know how it feels to lose someone close to you. Someone whom you trusted. The person, who just got you; accepted you for who you are. That person who made you feel safe, they were someone who just gave a damn when nobody else would. They tried to guide you, understand you. They were critical sometimes, but it was only… Read more »