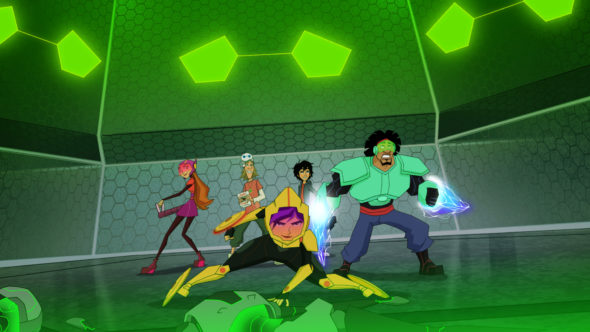 Big Hero 6 is coming to an end on Disney XD. The cable channel has announced that the current third season will end the animated series. New episodes are set to resume on February 1st, and viewers will see a two-part finale air on February 15th.

The series is a continuation of the Big Hero 6 movie, and Maya Rudolph, Ryan Potter, Scott Adsit, Jamie Chung, Khary Payton, Genesis Rodriguez, and Brooks Wheelan are featured as the voice cast for this Disney XD series.

The Wrap revealed the following about the two-part finale for Big Hero 6:

“The finale, titled “Krei-oke Night / The Mascot Upshot,” will see Krei enlisting Big Hero 6 to help launch his latest invention, a karaoke machine, in the first half. The second half sees the mascots deciding to add a new member to their family, presenting Hiro with an opportunity to defeat them once and for all.”

The decision to end the series now is due to a new Big Hero 6 series being developed for Disney+. Baymax is set to arrive on the streaming service in 2022.

What do you think? Are you sad to hear that the Big Hero 6 TV show is ending on Disney XD? Will you watch the finale next month?

I’m genuinely devastated that it’s over, I feel like there are still so many loose ends, especially with the reveal that Karmi likes Hiro now, I wanted to see her admit it to Hiro himself and I’m really sad we won’t be able to see it

I think it really sucks the tv show was cancelled, I found it very entertaining.

Will megan return for season 3?