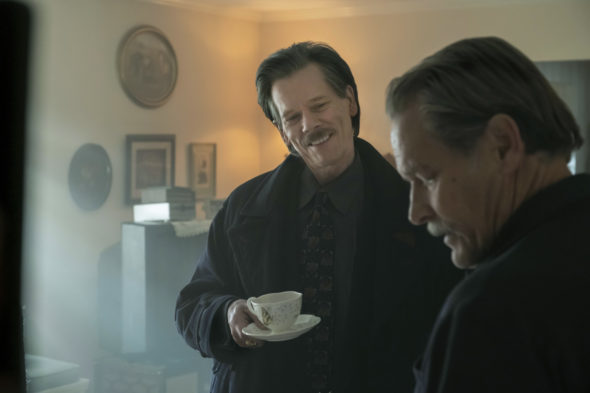 Will Ward and Rohr continue to work together? Is the City on a Hill TV show cancelled or renewed for a second season on Showtime? The television vulture is watching all the latest cancellation and renewal news, so this page is the place to track the status of City on a Hill, season two. Bookmark it, or subscribe for the latest updates. Remember, the television vulture is watching your shows. Are you?

The first season of City on a Hill averaged a 0.06 rating in the 18-49 demographic and 492,000 viewers. Learn how City on a Hill stacks up against the other Showtime TV shows.

Will Showtime cancel or renew City on a Hill for season two? Viewership is pretty good so I think it will be renewed, as long as Bacon and company want to continue. For now, I’ll keep an eye on the Nielsens and update this page with breaking developments. Subscribe for free City on a Hill cancellation and renewal alerts.

8/2/19 update: Showtime has renewed City on a Hill for a second season.

What do you think? Are you glad that the City on a Hill TV show has been renewed for a second season? How would you feel if Showtime had cancelled this TV series, instead?

I’ll be extremely sorry should City on a hill is not continuous because it really is exceptionally well scripted acting and when feels that this is going to be a special series even perhaps more special than Deadwood or escape at dannemora which was extremely good but I think this one is even better which is quite achievement so don’t forgot to stop it from having a second season and perhaps even third series!

Great show but if they don’t continue the storyline and see things through for ryans, kinickis and theFbi/ cops I can’t see it lasting a second season.

Yes good show. The whole accent on bacon is a good try but strained quite a bit(im being nice here) im from ny and hate when people try to act with the ny accent! But overall it’s pretty good to watch. It should be renewed

Great show! We look forward to seeing it.

This show is bananas. Be a shame if it gets canceled before it ever gets going!

Liked this very much… could use less filthy language though.