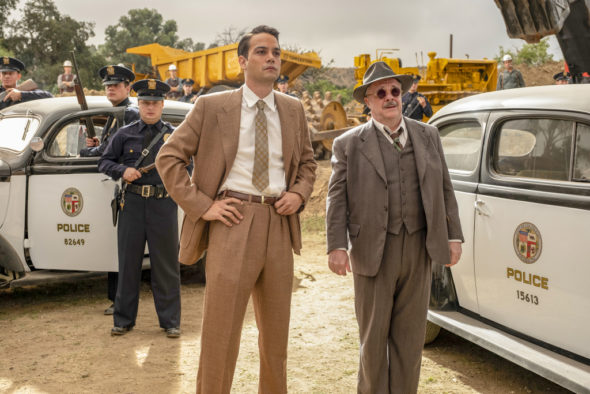 The fight won’t continue. Showtime has cancelled its Penny Dreadful: City of Angels TV show so, there won’t be a second season.

A supernatural drama series that’s a “spiritual descendent” of the original Penny Dreadful series from 2014, Penny Dreadful: City of Angels stars Nathan Lane, Natalie Dormer, Daniel Zovatto, Kerry Bishé, Rory Kinnear, Adriana Barraza, Michael Gladis, Jessica Garza, and Johnathan Nieves. It’s set in 1938 Los Angeles, a time and place deeply infused with social and political tension. The series follows earnest Detective Tiago Vega (Zovatto), the LAPD’s first Latino detective, and his seasoned partner, Lewis Michener (Lane). When a grisly murder shocks the city, they become embroiled in an epic story that reflects the rich history of Los Angeles — from the building of the city’s first freeways and its deep traditions of Mexican-American folklore, to the dangerous espionage actions of the Third Reich and the rise of radio evangelism.

Airing on Sunday nights, the first season of Penny Dreadful: City of Angels averaged a 0.03 rating in the 18-49 demographic and 348,000 viewers. Despite the low ratings, compared to other Showtime scripted series, the show was a middle-of-the-road performer.

“Showtime has decided not to move forward with another season of Penny Dreadful: City of Angels. We would like to thank executive producers John Logan, Michael Aguilar, and the entire cast and crew for their outstanding work on this project,” the premium channel said in a statement.

The 10th and final episode aired on June 28th.

What do you think? Did you enjoy this TV series? Would you have watched season two of Penny Dreadful: City of Angels on Showtime?

ILoved the show had drama, horror and noire

Was so sad to here they canceled 2nd season. My whole family loved the story. I hope another station picks it up.

I would like to know why this series was canceled…. I was hoping for at least 2 or 3 more seasons. Great show and wonderful cast!

I was counting on at least 2 or 3 seasons of this series. Why was it canceled????

I don’t know why you have cancelled City of Lights! My daughter and I thoroughly enjoyed all slepisodes EXCEPT for the last one as it was obvious you did not know how to end w/I ENDING! My gosh with all the mediocre series this was refreshing, interesting and the characters were rememorable. Nathan Lane was so out of his tv persona, refreshing and all the characters were interesting and the music was great!! Too bad you listened to the naysayers!! We will miss it!!

Very well interpreted and impressed to see how smart the scenario has been built. Would definitely enjoy a second season

Really enjoyed this show the throw backs to the era were fantastic, I can see cancellation of Showtime in my future

My husband and I loved the show. The acting, the setting, the layers to the story were spellbinding. It wasn’t promoted enough.

My husband and I loved the show. The acting, the settings, and the layers to the story were spellbinding. It definitely was not promoted enough.

I loved the show and so did my friends and family

It was the best new show on television last season. All the acting was first rate. The story was very interesting. I would have loved to see a season 2.

Loved the show looked forward to every week.

Absolutely, loved this show and looked forward to it. Didn’t advertise enough. It was great . Very different and scary.

This is sort of par for the course for Showtime. I recall when they cancelled the last season of “The Borgias,” without allowing any sort of wrap-up. Very disappointing. The production qualities of this show were amazing, but marketing it as being somehow akin to “Penny Dreadful” was a monumental mistake… those who did not like the first series would be turned off and those that loved it would likely be turned off, too, by the VERY different sort of plot-line and overall atmosphere of this so-called re-boot. Ah well, maybe Netflix will decide to pick up the show and… Read more »

They did publish a script for the unproduced series finale of The Borgias. https://amzn.to/3lbEE1s

I think this show had great promise. I am very upset that Showtime canceled it.The show had combined different elements of performance art such as music and dance along with socially relevant Brechtian theater. Dormer made Hogan’s dialogue sing and Nathan Lane, a performer I love, contributed his best work. It seems that some people never forgave the show for being something different than the original Penny Dreadful or that they were weary of political discussions.That’s unfortunate. The creative genius behind the original PD desperately wanted to write this story and it had a right to exist on it’s own… Read more »