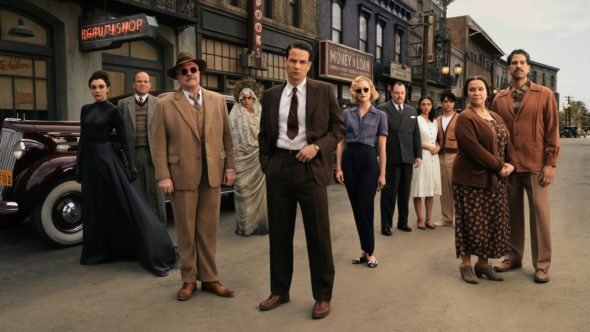 TV show description:
A supernatural drama series that’s a “spiritual descendent” of the original series, Penny Dreadful: City of Angels is set in 1938 Los Angeles, a time and place deeply infused with social and political tension.

When a grisly murder shocks the city, they become embroiled in an epic story that reflects the rich history of Los Angeles — from the building of the city’s first freeways and its deep traditions of Mexican-American folklore, to the dangerous espionage actions of the Third Reich and the rise of radio evangelism.

Series Finale:
Episode #10 — Day of the Dead
Sad news spreads through the Crimson Cat; Fly Rico tries to placate the volatile crowd while Rio argues for vengeance; Peter Craft, Elsa, and the boys are trapped in their car during a riot as Tiago tries to help Mateo.
First aired: June 28, 2020.

What do you think? Do you like the Penny Dreadful: City of Angels TV show? Do you think it should have been cancelled or renewed for a second season?

I loved this show! I am shocked to hear of its demise.

I loved the first Penny Dreadful until they screwed the ending up. I did t like this version at all

It deserves a 9.5. It’s excellent: interesting characterization in Maria, Lewis, Peter, Dottie, Tiago and Molly, although some of the sub-plots of Maria’s other children confuse rather than contribute to the plot.