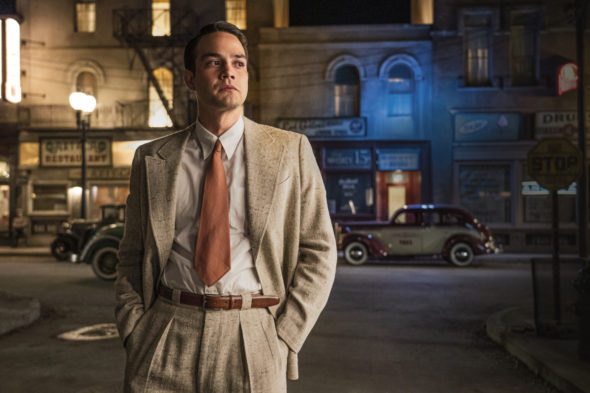 Who are the real demons? Has the Penny Dreadful: City of Angels TV show been cancelled or renewed for a second season on Showtime? The television vulture is watching all the latest cancellation and renewal news, so this page is the place to track the status of Penny Dreadful: City of Angels, season two. Bookmark it, or subscribe for the latest updates. Remember, the television vulture is watching your shows. Are you?

Airing on the Showtime cable channel, Penny Dreadful: City of Angels stars Nathan Lane, Natalie Dormer, Daniel Zovatto, Kerry Bishé, Rory Kinnear, Adriana Barraza, Michael Gladis, Jessica Garza, and Johnathan Nieves. It’s set in 1938 Los Angeles, a time and place deeply infused with social and political tension. The series follows earnest Detective Tiago Vega (Zovatto), the LAPD’s first Latino detective, and his seasoned partner, Lewis Michener (Lane). When a grisly murder shocks the city, they become embroiled in an epic story that reflects the rich history of Los Angeles — from the building of the city’s first freeways and its deep traditions of Mexican-American folklore, to the dangerous espionage actions of the Third Reich and the rise of radio evangelism.

What do you think? Were you hoping the Penny Dreadful: City of Angels TV show would be renewed for a second season? Are you sorry that Showtime cancelled this TV series, instead?

For the first time I movie history a movie about Chicano people and Families. The dance routine was fantastic!! The other politican stuff has been going one for decades. Bring back the second season wit emphasis on how Chacanos and are I5 in the political preocss.

One of the best series I have seen. I think it was right up their with Game of Thrones. It had drama, romance, nostalgia, music, dancing, and intrigue just touched on every thing. I would love a season two

Really lived the show so sorry there will not be a 2nd season.

I loved the show and was looking forward to season 2.. I’m so disappointed that they did not renew the show. I will be canceling my showtime subscription

I know of no other show that deserves another season than City of Angels. It is vital in it’s ability to speak to current issues such as race, spiritualism and what it means to be human. Taking a que from Bertolt Brecht, at the very end of the first season, Detective Vega stepped out of character and became Daniel Zovatto. He looked straight into the camera and said, “This is not the United States of America.”What an incredible moment to end the season on. This show is bold and innovative and unafraid of the challenges it has dared to take… Read more »

this show is good enough to have been on public network tv. this is not showtime quality programming, not even close. this show is subpar pure boredom that just drags and drags until you change the channel. i seriously hope it’s cancelled. not even close to the quality that prior season of penny dreadful.

The show is a TRAINWRECK! Writing is predictable.

I hope City of Angels will be renewed. I enjoyed it immensely. I’m a fan of ‘day of the dead’ though, and from Chicago with a large Mexican population.

Posted this in a reply but its the truth. The show is horrendous and a bastardization of the Penny Dreadful name. Not Latino myself but I was hoping to see the characters, lore, and supernatural history of the Latin/Central American point of view. The first Penny Dreadful was amazing. It told the story of fairly well known European literary supernatural characters while also blending them into a coherent story and keeping fairly accurate to the time period and culture. I was hoping this would be similar just with less world known characters though I do know of Santa Meurte. But… Read more »

It should been called Very Dreadful – City of Angels – what was with all the gay story lines, even the pachucos were portrayed as such, where was all this going, the writers could have done a better job, the story lines were all over the place, bad devil, morphing devil, too many devils, Nazi plot, Police Corruptions corrupt politicians what the hell, too much for the brain to comprehend. Where was God in all of this, I wish he could have saved the actors. Simple is better, yeah when you killed Tiago’s squeeze, that did it for me, I… Read more »