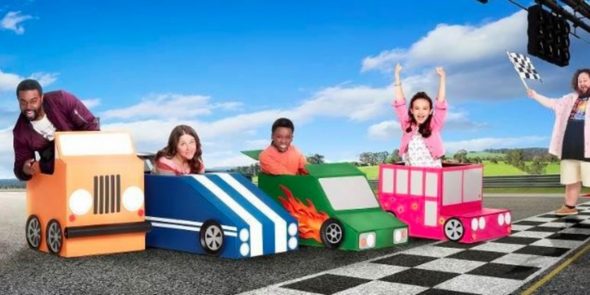 Disney Channel is ready to roll. The network just announced the premiere date for season two of Just Roll With It.

The live-action family comedy allows the studio audience to choose in which direction key scenes will advance, and then the actors improvise. The series centers on preteens Blair (Kaylin Hayman) and Owen (Ramon Reed), newly minted step-siblings in Bennett-Blatt family. Blair’s mom Rachel (Suzi Barrett) recently married Owen’s dad, Byron (Tobie Windham), her co-worker at BEATZ 101. Now, with their lighthearted parents, Owen and Blair are trying to get the hang of everyday family life in a brand-new blended family.

Season two of Just Roll With It premieres on Disney Channel on March 15th at 8:45 pm. ET/PT.

“Just Roll With It” follows the newly blended Bennett-Blatt family as they navigate everyday family life and the ups and downs of adolescence. The series stars Tobie Windham and Suzi Barrett as fun-loving newlyweds and parents, Byron and Rachel; talented young actors Ramon Reed and Kaylin Hayman as preteen step-siblings, Owen and Blair; and J.C. Currais as The Gator.

In the season two premiere, the Bennett-Blatt family is finally rescued from the sea only to discover Rachel’s mischievous and somewhat unpredictable dad (Ratzenberger) – who relishes in being a doting but unruly Grandpa – has been kicked out of his retirement community and needs to move in with the family.

The series is produced by Kenwood TV Productions, Inc., and is filmed in Los Angeles. It carries a TV-G parental guideline.”

What do you think? Does your family Just Roll With It? Will you watch season two?