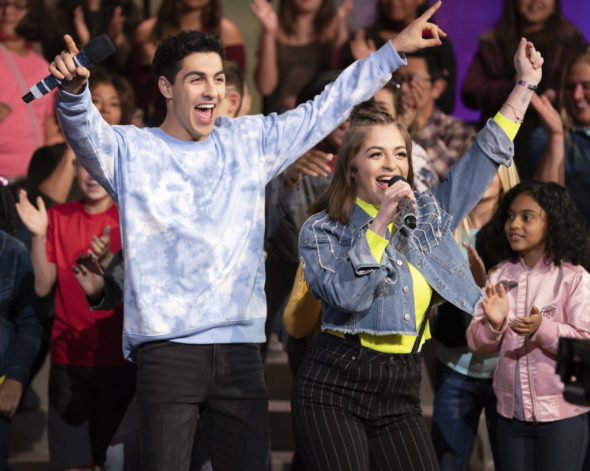 Get ready to dance along! Disney Fam Jam, a new dance competition series is coming soon to the Disney Channel. Ariel Martin and Trevor Tordjman are co-hosting this series, and they will work with Phil Wright.

Disney Channel revealed more about the brand new series in a press release. Check that out below.

Each episode of the competition series will feature two families with kids hitting the floor to see which will be crowned Disney Fam Jam champions. At the end of each episode, the studio audience will vote for their favorite dance family, resulting in the winners taking home a $10,000 prize along with a Disney Fam Jam trophy.

Wright will take the audience behind the scenes as he gets to know each family and how dance plays a part in their lives. The families will learn choreography from Wright and master their special moves during the rehearsal of their big stage performance. Martin and Tordjman will join Wright on the electrifying “Disney Fam Jam” stage, where the families come together to compete in front of the studio audience.

Phil Wright is a world-renowned dance teacher and choreographer. He created and founded “The Parent Jam™.” He travels the world bringing families and students together to provide encouragement and positivity in each dance class. Wright has worked with some of today’s top artists including Lil Nas X, Will Smith, MC Hammer, TLC and G-Eazy ft. Cardi B.

At just 18 years old, Ariel Martin is an accomplished actress, singer, entrepreneur and author. In addition to starring in the Disney Channel Original Movie ZOMBIES 2, Martin is a social media sensation, having over 40 million followers across platforms.

Trevor Tordjman most recently reprises his role as Bucky, Seabrook High’s head cheerleader, in the Disney Channel Original Movie ZOMBIES 2, the highly anticipated sequel to ZOMBIES. An accomplished dancer, Tordjman is best known for his role as a series regular on five seasons of the dance drama “The Next Step,” the highest-rated teen show on Canada’s Family Channel.

What do you think? Will you watch Disney Fam Jam when it arrives next month?

Hi my name is Angel Smith and I’m 14 years old. My family and I have been watching this show since it has started and we are wondering if we have a chance on this show. My little Sister Azariah age 7 and my mom Imani would love to do it with me. We want to share our dancing talents with the world. We want to inspire others to be confident in their talents and love who they are. If we even have a chance on this show please contact me. Thank you!!!

My family is called the Gray family

We love to watch the show as a family. My 6 yr old desperately wants to get on the show. How do we audition.

My family LOVES this show!!! My son is begging for a chance to audition to have our family on Fam Jam!!