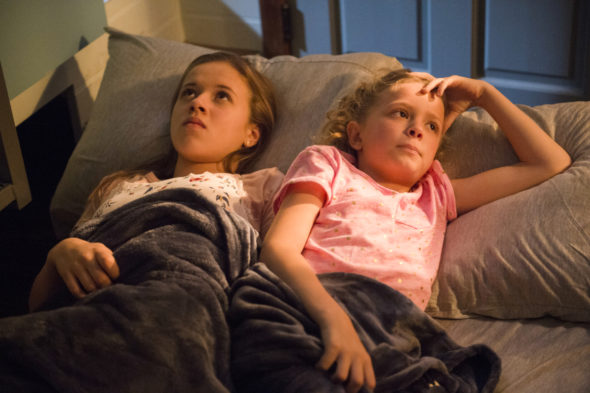 Are the Shorts short timers? Is the Life In Pieces TV show cancelled or renewed for a fourth season on CBS? The television vulture is watching all the latest TV cancellation and renewal news, so this page is the place to track the status of Life In Pieces, season four. Bookmark it, or subscribe for the latest updates. Remember, the television vulture is watching your shows. Are you?

The third season of Life in Pieces averaged a 1.11 rating in the 18-49 demographic and 6.437 million viewers. Compared to season two, that’s down by 12/14% in the demo and up by 5.11% in viewership. Find out how Life In Pieces stacks up against the other CBS TV shows.

The ratings aren’t great but it’s doing pretty well when compared to last year’s numbers. Despite not being renewed when CBS renewed most of their shows, I still believe that Life in Pieces will score a renewal. I’ll keep an eye on the Nielsens and will update this page with breaking developments. Subscribe for free updates on any Life In Pieces cancellation or renewal news.


What do you think? Are you glad that CBS renewed its Life In Pieces TV show for season four? Would you have been upset if this series had been cancelled?

This is so sad. I am British and I love American comedy. I know a good comedy show and this is really one of those.
I have seen very good, okay and bad.
This was a Very very good show.
Very very sad.
You really had a diamond in this show and obviously the producers, directors etc could not see the full potential.
This show really worked.
Again, Very sad
I have watched the entire four series’ again.
Why…because
They are that good

I am very upset that Life in Pieces is cancelled. Show was funny with a great cast. There are no new shows that are funny. Big Mistake cancelling. I’m gonna have to watch reruns of old shows like Mash and Big Bang. Such a shame.

I love this show Life in Pieces, there’s other shows that should be cancelled instead of this one, BIG MISTAKE!!!

I can’t believe that Life In Pieces is not coming back!! This is one of the best shows on TV!! Please rethink this decision. It’s the only show we look forward to watching every week!!

I am totally peeved that CBS did not premiere Season 4 of Life in Pieces until April. I will NEVER watch another series on regular TV. I will wait until Hulu or Netflix. Congratulations, network TV, you have shot yourself in the foot.

Total mistake!!!! Best and funniest show currently on the tube. Maybe you should try changing the time slot instead of making a big mistake. The entire cast seem to be like a real family( or should I say crazy real family).
Please before it’s too late !!!!!!

My life in pieces is one of the quirkiest, funny shows on the. It’s a breath of fresh air and funny too! I would be very disappointed if it were cancelled

Yes , I always look forward to watching Life in Pieces, each story had something funny in it. It had a great & famous cast!….what happened ? Who decided to cancel this sitcom?

Hello, I am only wondering when Life in Piece, Season 4 will be aired. Simple question. Problem: no one seems to be able to give an answer. Will there be a season 4 or not? Simple yes or no answer. I love this show, it’s the only night time program I watch. Waiting for your reply. Thank you.

We love this show and have been following since the beginning. I kept hearing it would be back in November but November came and went and it was a no-show. I also heard all of the available time slots are filled?? When will it be back!?!?! It’s a great show.

Why can’t we get an answer to this?

Who at CBS thought the abysmal Happily Together was a better bet than Life in Pieces? Might they may have been distantly associated with the decision to kill off the wife on Kevin Can Wait? An equally foolish decision.