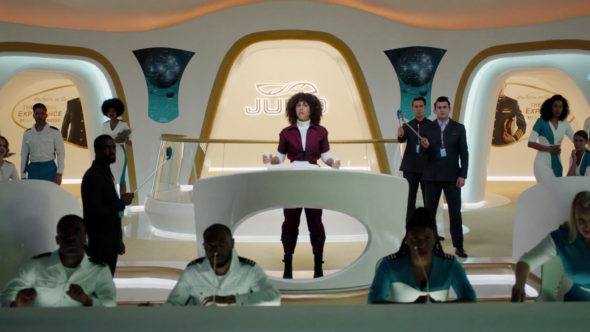 Are Clark and his crew up to the challenge in the first season of the Avenue 5 TV show on HBO? As we all know, the Nielsen ratings typically play a big role in determining whether a TV show like Avenue 5 is cancelled or renewed for season two. Unfortunately, most of us do not live in Nielsen households. Because many viewers feel frustration when their viewing habits and opinions aren’t considered, we invite you to rate all of the first season episodes of Avenue 5 here. *Status update below.

An HBO sci-fi comedy series, the Avenue 5 TV show stars Hugh Laurie, Josh Gad, Zach Woods, Nikki Amuka-Bird, Rebecca Front, Lenora Crichlow, Suzy Nakamura, and Ethan Phillips. The story is set 40 years in the future when traveling the solar system is a booming, multibillion-dollar business. Ryan Clark (Laurie) is the confident and suave captain of “Avenue 5.” It’s a space cruise ship that features luxury amenities like gourmet buffets, a spa, an observation deck, and yoga classes. When the ship suddenly encounters technical difficulties, it’s up to Ryan and his crew to calm the disgruntled passengers and find a way to deal with unexpected events onboard – though they may or may not be equipped for the task.

What do you think? Which season one episodes of the Avenue 5 TV series do you rate as wonderful, terrible, or somewhere between? Do you think that Avenue 5 should be cancelled or renewed for a second season on HBO? Don’t forget to vote, and share your thoughts, below.

Brilliant and unlike anything else on TV.

Great replacement for Silicon Valley. Cast is superb, instant chemistry, (kind of would like Jorge Garcia as owner better), but really had my family in belly laughs through whole episode. Even the unlikeable people were funny. So glad to see “Jared” doing what he does best, trying to calm people down. Best was Laurie switching to his natural voice then back to American accent! Brilliant all around! Please renew for a season two!