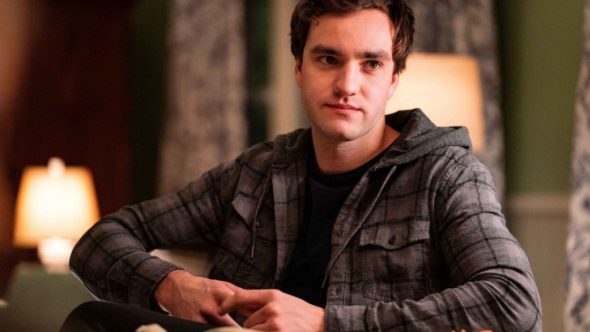 Is there more story to tell when the first season of HBO’s Mrs. Fletcher TV show concludes? As we all know, the Nielsen ratings typically play a big role in determining whether a TV show like Mrs. Fletcher is cancelled or renewed for season two. Unfortunately, most of us do not live in Nielsen households. Because many viewers feel frustration when their viewing habits and opinions aren’t considered, we invite you to rate all of the first season episodes of Mrs. Fletcher here.

An HBO comedic series that’s based on the novel by Tom Perrotta, Mrs. Fletcher stars Kathryn Hahn and Jackson White with Owen Teague, Katie Kershaw, Domenick Lombardozzi, Cameron Boyce, Jen Richards, and Casey Wilson. The show is a dual coming-of-age story that chronicles the personal and sexual journeys of an empty-nest mother and her college freshman son. Eve Fletcher (Hahn) is a single mother in her 40s who works as the executive director of a senior center. She drops off her only child at college and returns home to a very empty house. Meanwhile, Eve’s son Brendan (White), a popular (though sometimes clueless) jock, finds that college is a little more complicated than he expected.

What do you think? Which season one episodes of the Mrs. Fletcher TV series do you rate as wonderful, terrible, or somewhere between? Do you think that Mrs. Fletcher on HBO should be renewed for a second season? Don’t forget to vote, and share your thoughts, below.

12/8/19 update: HBO designated the season finale as the series finale so, at least for now, there won’t be a second season for Mrs. Fletcher.

Topical and important show that should be renewed. Real people, real issues, humorous and poignant. Thought provoking with insightful story lines to a wide demographic. Another season would be a catalyst in the positive evolution of TV/Cable/Streaming.

It is extremely disappointing that this superb series is not being picked up for another season. If there are extenuating casting issues, or perhaps terminal union issues with writers, then so be it, but to set up such an excellent story arc, with such well presented, relatable characters, and talented fresh acting and then just stop like that is a shame, and as I say disappointing. I hope this isn’t an early sign of the leadership change at HBO, but I fear it is such. In past years, years that made HBO what it is, this would never happen. That… Read more »

I really love this show..at first I wasn’t sure what I was really watching but after I actually paid attention to it..this is a wonderfully, complex, amusing, and skillfully crafted show that makes you cringe…and even snort with with laughter. I love this show…I hope this show lasts for many seasons and if they need more financial backing…just hire her son to go steal money from all these shows that are on now that are making a load of money but they are really just pricey . …okkies that’s all I wanted to say…WE NEED A 2ND SEASON….O’DOYLE RULE!!!✊✊‍♀️

This show is very unique and well written. The casting is superb. It addresses many issues of our times with honesty and sensitivity and the cast is endearing with all their foibles. I understand as of Dec 9, 2019, the day after the “finale”, that this was intended as a “mini-series” and this is the end. Still, as with “Big Little Lies”, the public might convince the producers/writers of one more season. I would love to see a further denouement of the character arc in a season 2. I also do not believe this show got enough publicity and this… Read more »

I loved the trans and LGB+ representation! I’m non-binary trans (and pan) myself, so it always makes me happy to see that. I liked this show a lot more than I expected to and hope it gets renewed for a second season