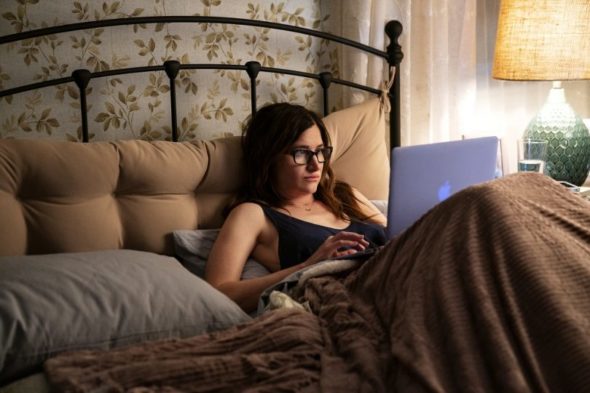 HBO has promoted Mrs. Fletcher as a “limited series” which, by definition, means that there are a set number of episodes. In this case, it seems like it may actually be a “mini-series” which is conceived as a one-season story. Still, if the ratings are good enough, perhaps there could be a second season of Mrs. Fletcher, ala Big Little Lies. Stay tuned. *Status update below.

A comedic series that’s based on the novel by Tom Perrotta, Mrs. Fletcher stars Kathryn Hahn and Jackson White with Owen Teague, Katie Kershaw, Domenick Lombardozzi, Cameron Boyce, Jen Richards, and Casey Wilson. The show is a dual coming-of-age story that chronicles the personal and sexual journeys of an empty-nest mother and her college freshman son. Eve Fletcher (Hahn) is a single mother in her 40s who works as the executive director of a senior center. She drops off her only child at college and returns home to a very empty house. Meanwhile, Eve’s son Brendan (White), a popular (though sometimes clueless) jock, finds that college is a little more complicated than he expected. .

What do you think? Do you like the Mrs. Fletcher TV series on HBO? Should it be cancelled or renewed for a second season?

*12/8/19 update: HBO designated the season finale as the series finale so, at least for now, there won’t be a second season for Mrs. Fletcher.

I Loved this series and there was so many directions to going why did you end it you didn’t even give it a chance! Very sad

I like the series, but HBO never aired the season finale as far as I can tell. I’ve gotten on HBO every few days since episode 6 aired and have yet to see episode 7 pop up so that I can watch it. Has anyone else been able to see it?

this show is complete trash. nothing is even going on in the show.

This show is horrible. There is no point, the dialogue is juvenile, and no character ever finishes a sentence. I thought it would be good at first; Eve’s life with the seniors, her relationship with Brandon, but it turns out to be nothing more than a poorly written sex-romp.
Rating: F Don’t bring it back!!!

I have watched the first two episodes of Mrs. Fletcher and thus far I am underwhelmed–to put it charitably. The premise is ripe for satire but is sorely lacking. Why have they involved the son and his time at college; as a character his is shallow and self involved and while I admit I could be prejudging a bit early nothing about him is likable and would appear to have nothing to do with his mother. how closely this follows the book is something I doubt I will ever find out as the characters simply aren’t that interesting–a pity since… Read more »