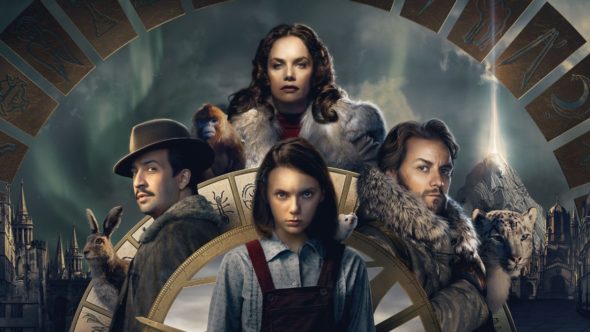 There’s no need to worry that the His Dark Materials TV show will be cancelled soon. A co-production of HBO and BBC, the series has already been renewed for a second season of eight episodes. Will that be the end? Will His Dark Materials continue beyond that? Stay tuned.

A fantasy mystery series that’s based on the novels by Philip Pullman, His Dark Materials stars Dafne Keen, Ruth Wilson, Anne-Marie Duff, Clarke Peters, James Cosmo, Ariyon Bakare, Will Keen, Lucian Msamati, Gary Lewis, Lewin Lloyd, Daniel Frogson, and James McAvoy. Recurring performers include Ian Gelder, Lin-Manuel Miranda, Georgina Campbell, Mat Fraser, Geoff Bell, and Simon Manyonda. The story is set in an alternate world where humans have animal companions that are the manifestation of the human soul. Young Lyra Belacqua (Keen) is an orphan who lives with the scholars at Jordan College, Oxford. She embarks upon a dangerous journey of discovery from Oxford to London and is subsequently thrown into the nomadic world of the boat dwelling Gyptians.

What do you think? Do you like the His Dark Materials TV series on HBO? Are you glad that it’s been renewed for a second season?

The main actress is so wooden , the actor that played Will completely outshined her. they both don’t look the part , but at least his acting is good , his face is expressive , ect . what were they thinking casting her ? The Bill Scoresby from the movie is way better than this one, he looked the part ( old man , ect) and his acting was better also . why racebend the the gypsies ? gypsies are a minority , why not represent them as the movie did ? ( Ma Costa is now a skinny blond… Read more »

I watched episode 1 and 2 and fell a sleep in both. Watching the trailer I though this was going to be good. Its boring as heck and the characters are like wooden potatoes.

Awful disappointing boring version of a masterpiece novel and movie….this t.v show should not be renewed.

Some episodes of Teen Mom have bigger audience then this unwatchable, cringey show.

Love the series. We rate it as excellent but positive comments from friends do not show it. It’s a Winner in America.

Love this series and we love Ruth Wilson

Ruth Wilson is excellent. We would watch her in anything. She creates a winner for a series

424k? Renewed for 2nd season? Logic is sometimes bigger mystery then life itself.

Renewed before the duffision.
Plus : this is not a HBO series, but produced by BBC and On BBC the audiences are extra high (10 millions for first episode)

Over here audience rejected this.

Where is “here”? Popularity does not equal quality. It’s more complex than the usual fantasy fare.

They shot the first and second series back-to-back so that Dafne Keen could stay young enough to play the role.

As a fan of the books I’d be disappointed if they didn’t adapt the third novel. It would be very expensive though due to the number of army scenes and creatures.

as someone who read the books as well , i was underwhelmed by season one . lack of daemons here , wooden acting there ( Dafne doesn’t fully embodies Lyra as we know her from the books ) ,weird casting choices everywhere also only one witch shown ? why ? there is no cohesion in that season . the only actors that gave me book vibes were Will , Lord Asriel and Mrs Coulter , everyone else was either badly directed or just badly acting . I’m not against changes at all , for example I loved that added scene… Read more »