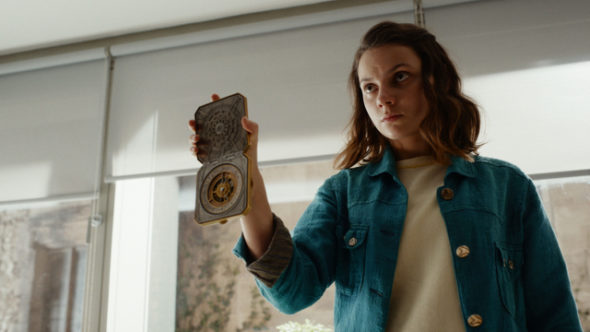 It looks like Lyra’s adventures are coming to a conclusion. HBO and BBC One have renewed the His Dark Materials fantasy mystery series for a third and final season.

His Dark Materials stars Dafne Keen, Ruth Wilson, Amir Wilson, Ariyon Bakare, Andrew Scott, Will Keen, Ruta Gedmintas, Lin-Manuel Miranda, Terence Stamp, Jade Anouka, and Simone Kirby. The story is set in an alternate world where humans have animal companions that are the manifestation of the human soul. Young Lyra Belacqua (Keen) is an orphan who lives with the scholars at Jordan College, Oxford. She embarks upon a dangerous journey of discovery from Oxford to London and is subsequently thrown into the nomadic world of the boat dwelling Gyptians. Season two picks up after Lord Asriel (McAvoy) has opened a bridge to a new world. Distraught over the death of her best friend, Lyra follows Asriel into the unknown. In a strange and mysterious abandoned city, she meets Will (Amir Wilson), a boy from our world who is also running from a troubled past. Meanwhile, Mrs. Coulter (Ruth Wilson) searches for Lyra, determined to bring her home by any means necessary.

Airing on Monday nights in the United States, the second season of His Dark Materials averages a 0.06 rating in the 18-49 demographic and 234,000 viewers on HBO. Compared to season one, that’s down by 44% in the demo and down by 45% in viewership. The season finale airs next week.

HBO and BBC One have renewed the drama series HIS DARK MATERIALS for a third season, it was announced today by Francesca Orsi, Executive Vice President, HBO Programming. Production on the eight-episode third season is slated to begin in Cardiff in 2021.

“Bringing Phillip Pullman’s epic, intricate and culturally resonant body of work to television has been a tremendous privilege,” said Orsi. “We thank our incredible partners at the BBC and the entire Bad Wolf team, led by the indefatigable Jane Tranter, for their exceptional work on the first two seasons. We look forward to completing the trilogy with this final chapter in Lyra’s journey.”

“It’s been a joy to see how HIS DARK MATERIALS has brought British TV audiences of all ages together on BBC One and BBC iPlayer,” said Ben Irving, BBC Drama Commissioning Editor, Wales. “Fans of Phillip Pullman’s incredible books, and newcomers alike, have been enthralled by adventuring with Lyra and Will through multiple worlds. We are thrilled that they will be able to continue their journey in a third series of this beautifully realized drama. Our thanks to our partners at HBO and the dedicated creative team at Bad Wolf for making a landmark series that will continue to be watched and enjoyed on the BBC for years to come.”

“HIS DARK MATERIALS has been a truly global TV experience and a personal career highlight,” said Executive Producer Jane Tranter. “The creative team at Bad Wolf in Cardiff made the impossible possible and brought Philip Pullman’s worlds into vivid life. To see that hard work and dedication applauded and embraced by fans around the world has made all the hard work worthwhile. None of this would have been possible without the wonderful commitment and conviction of the BBC and HBO. I am excited, thrilled and honoured to be making the third part of Philip Pullman’s trilogy with their support and encouragement. Diolch”

Adapting Philip Pullman’s award-winning trilogy of the same name, which is considered a modern masterpiece of imaginative fiction, HIS DARK MATERIALS returned for its seven-episode second season on November 16, 2020. The series follows Lyra (Dafne Keen), a seemingly ordinary but brave young woman from another world. Season two began as Lyra, distraught over the death of her best friend, embarks upon a journey in a strange and mysterious abandoned city. There she meets Will (Amir Wilson), a boy from our world who is also running from a troubled past. Lyra and Will learn their destinies are tied to reuniting Will with his father but find their path is constantly thwarted as a war begins to brew around them. Meanwhile, Mrs. Coulter (Ruth Wilson) searches for Lyra, determined to bring her home by any means necessary.

GQ called this season of HIS DARK MATERIALS “a towering success,” while Paste Magazine hailed it as “more epic than ever before.” Mashable praised the show’s “absorbing cast,” while Slashfilm called this season “essential viewing.”

HIS DARK MATERIALS will conclude its second season Monday, December 28 at 9:00 p.m. ET/PT on HBO. Season one and season two episodes to date are currently available to stream on HBO Max. Most HBO subscribers in the U.S. have access to HBO Max as part of their HBO subscription and can visit HBOMax.com for more details.

What do you think? Have you enjoyed watching the His Dark Materials TV series? Will you tune in for season three? Are you sorry that the show is ending?

I like anything in this genre. And even though the book ends with the third season, it’s too bad that there’s nobody out there that can continue this story. I will miss it after this coming season. So many of the programs I like are being cancelled after the coming season or already have been. A Discovery of witches, Motherland, The Sinner, A burden of truth, Prodigal son, Clarice, NCIS New Orleans, The Unicorn, it seems like if it’s at the top of my recording list then it gets cancelled. I wouldn’t even watch ABC anymore if it wasn’t for… Read more »

I’m really sorry to hear that the series His dark materials is ending, it’s a enjoyable show so different to any other, I would love to watch many many more

I love this show even better than the movie. Nicole Kidman was wonderful, but Ruth Wilson really sells it, for me. I also loved Dafne Keen’s performances as well, actually the whole cast. Season two was riveting, and the portrayals of the different worlds was very clever. Looking forward to Season 3. So sad its going to be the last one.

Sorry to see it’s ending. I love the show

While its no GOT, it does go a ways towards filling the hole left behind in the end of a masterpiece. I like that its not just another sword and sorcery, fill in the blanks story. The leads are well acted, but the backstory feels underdeveloped. I’ll watch the third season.

I read the books and loved them and the series is wonderfully executed. Yes I want a 3rd series.

Superb casting and special effects. It would be very easy to get lost in the storyline and begin to believe in animals talking! I’m so glad there will be another season. Although it would be wonderful if there were several more seasons slated and not just one!

They should have hired a beautiful girl instead of this one.

Decent show, but a few of the main characters are annoying as all hell! 🙂