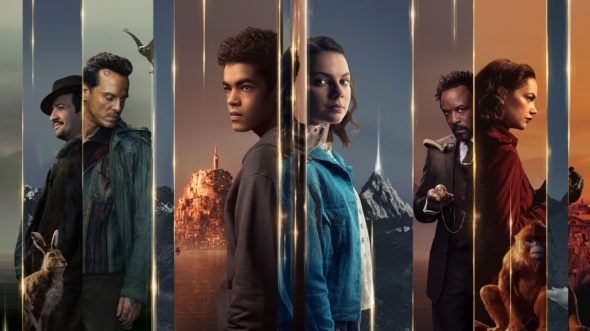 A fantasy drama series, His Dark Materials is based on a series of three novels by Philip Pullman. The second season is primarily adapted from the second book in the series, The Subtle Knife. Will the cast and crew be given the opportunity to finish telling the story, even if viewership on BBC One and HBO isn’t very high? Will His Dark Materials be cancelled or renewed for season three? Stay tuned.  *Status Update Below.

His Dark Materials stars Dafne Keen, Ruth Wilson, Amir Wilson, Ariyon Bakare, Andrew Scott, Will Keen, Ruta Gedmintas, Lin-Manuel Miranda, Terence Stamp, Jade Anouka, and Simone Kirby. The story is set in an alternate world where humans have animal companions that are the manifestation of the human soul. Young Lyra Belacqua (Keen) is an orphan who lives with the scholars at Jordan College, Oxford. She embarks upon a dangerous journey of discovery from Oxford to London and is subsequently thrown into the nomadic world of the boat dwelling Gyptians. Season two picks up after Lord Asriel (McAvoy) has opened a bridge to a new world. Distraught over the death of her best friend, Lyra follows Asriel into the unknown. In a strange and mysterious abandoned city, she meets Will (Amir Wilson), a boy from our world who is also running from a troubled past. Meanwhile, Mrs. Coulter (Ruth Wilson) searches for Lyra, determined to bring her home by any means necessary.

What do you think? Do you like the His Dark Materials TV series on HBO? Should it be cancelled or renewed for a third season?

*12/23/20 update: His Dark Materials has been renewed for a third and final season.

This is the best tv program currently available on HBO and network tv. I read the series many years ago and was captivated by it. The movie based on Book 1 was pretty good, but forces (Magisterium??) prevented the next two sequels (check out Wikipedia for more info). It isn’t a blueprint of the novels, but it is terrific. Enjoy!