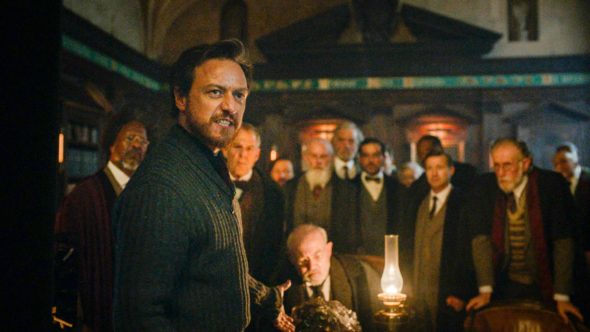 Where will Lyra’s journey take her? Has the His Dark Materials TV show been cancelled or renewed for a second season on HBO? The television vulture is watching all the latest cancellation and renewal news, so this page is the place to track the status of His Dark Materials, season two. Bookmark it, or subscribe for the latest updates. Remember, the television vulture is watching your shows. Are you?

Airing on the HBO cable channel, His Dark Materials stars Dafne Keen, Ruth Wilson, Anne-Marie Duff, Clarke Peters, James Cosmo, Ariyon Bakare, Will Keen, Lucian Msamati, Gary Lewis, Lewin Lloyd, Daniel Frogson, and James McAvoy. Recurring performers include Ian Gelder, Lin-Manuel Miranda, Georgina Campbell, Mat Fraser, Geoff Bell, and Simon Manyonda. The story is set in an alternate world where humans have animal companions that are the manifestation of the human soul. Young Lyra Belacqua (Keen) is an orphan who lives with the scholars at Jordan College, Oxford. She embarks upon a dangerous journey of discovery from Oxford to London and is subsequently thrown into the nomadic world of the boat dwelling Gyptians.

There’s no need to worry about this show being cancelled in the immediate future. A co-production of HBO and BBC, His Dark Materials has already been renewed for season two. I’ll update this page with breaking developments. Subscribe for free alerts on His Dark Materials cancellation or renewal news.

What do you think? Are you glad that the His Dark Materials TV show has been renewed for a second season? How would you feel if HBO had cancelled this TV series, instead?