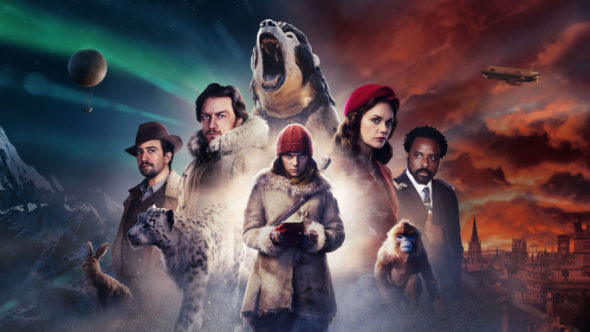 TV show description:
A fantasy mystery series that’s based on the novel series by Philip Pullman, His Dark Materials is set in an alternate world where humans have animal companions that are the manifestation of the human soul.

Young Lyra Belacqua (Keen) is an orphan who lives with scholars at Jordan College, Oxford. Placed there at the request of her Uncle, Lord Asriel (McAvoy), she lives a sheltered life amongst the college staff while under the watchful protection of The Master (Peters) and Librarian Scholar Charles (Gelder).

When the glamorous and mesmeric Mrs. Coulter (Wilson) enters Lyra’s life, the girl embarks upon a dangerous journey of discovery from Oxford to London. She meets Father MacPhail (Keen), Lord Boreal (Bakare), and journalist Adele Starminster (Campbell) at a glittering society party where she first hears about the sinister General Oblation Board.

Once in the North, Lyra meets charismatic aeronaut and adventurer Lee Scoresby (Miranda), who joins them on their epic journey and who becomes one of Lyra’s closest allies.

Series Finale:
Episode #23 — The Botanic Garden
Lyra and Will reunite with Mary and hear a story that changes everything. But there is one last sacrifice they must make.
First aired: December 26, 2022.

What do you think? Do you like the His Dark Materials TV show on HBO? Do you think it should have ended or had the story extended into a fourth season?

what a great show

This series is very faithful to the book especially in the themes and ideas. While the basic plot is fairly straightforward the way that it is developed is quite complex. After one reads the book it is quite understandable why the film “The Golden Compass” was not successful. This is a story which is best told in a mini-series. The casting is excellent, especially Ruth Wilson as Mrs. Coulter and Lin-Manuel Miranda as Lee Scorsby. The inclusion of Will who first appears in “The Subtle Knife” adds to the story. While the setting is in a fictional alternate world we… Read more »