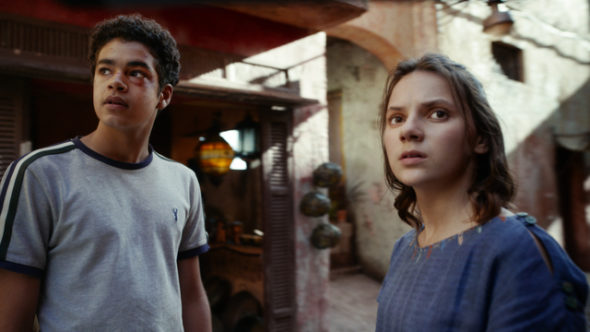 What will Lyra uncover in a new world? Has the His Dark Materials TV show been cancelled or renewed for a third season on HBO? The television vulture is watching all the latest cancellation and renewal news, so this page is the place to track the status of His Dark Materials, season three. Bookmark it, or subscribe for the latest updates. Remember, the television vulture is watching your shows. Are you?

Airing on the HBO cable channel in the United States, His Dark Materials stars Dafne Keen, Ruth Wilson, Amir Wilson, Ariyon Bakare, Andrew Scott, Will Keen, Ruta Gedmintas, Lin-Manuel Miranda, Terence Stamp, Jade Anouka, and Simone Kirby. The story is set in an alternate world where humans have animal companions that are the manifestation of the human soul. Young Lyra Belacqua (Keen) is an orphan who lives with the scholars at Jordan College, Oxford. She embarks upon a dangerous journey of discovery from Oxford to London and is subsequently thrown into the nomadic world of the boat dwelling Gyptians. Season two picks up after Lord Asriel (McAvoy) has opened a bridge to a new world. Distraught over the death of her best friend, Lyra follows Asriel into the unknown. In a strange and mysterious abandoned city, she meets Will (Amir Wilson), a boy from our world who is also running from a troubled past. Meanwhile, Mrs. Coulter (Ruth Wilson) searches for Lyra, determined to bring her home by any means necessary.

The second season of His Dark Materials averaged a 0.05 rating in the 18-49 demographic and 246,000 viewers on HBO. Compared to season one, that’s down by 47% in the demo and down by 42% in viewership. Find out how His Dark Materials stacks up against other HBO TV shows.

Will HBO and BBC One cancel or renew His Dark Materials for season three? This fantasy series is a co-production so the costs are shared. The ratings on HBO have been low but the cable channel isn’t worried about attracting advertisers, just keeping subscribers. I suspect that it will be renewed and the story, based on a trilogy of novels by Philip Pullman, will have a conclusion. I’ll update this page with breaking developments. Subscribe for free alerts on His Dark Materials cancellation or renewal news.

12/23/20 update: His Dark Materials has been renewed for a third and final season.

What do you think? Are you glad that the His Dark Materials TV show has been renewed for a third and final season? How would you feel if HBO and BBC One had cancelled this TV series, instead?