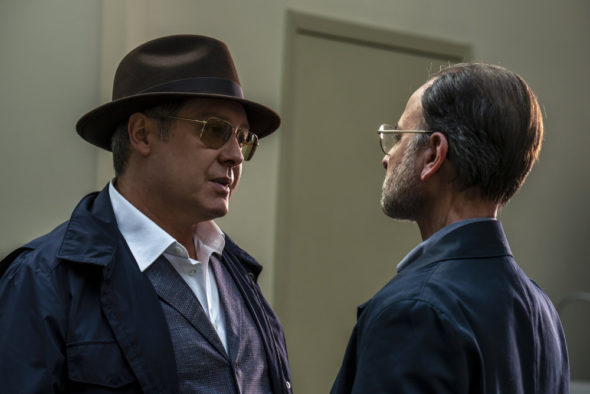 The Blacklist has added to its cast. Anya Banerjee is joining the NBC series as Siya Malik, the daughter of Meera Malik, — a character played by Parminder Nagra in the first season of the series.

James Spader (above, left), Diego Klattenhoff, Hisham Tawfiq, and Harry Lennix star in the thriller series which follows master criminal Raymond “Red” Reddington (Spader) as he works with the FBI to take down global criminals.

TV Line revealed the following about her character on the NBC series:

Siya is an active Intelligence Officer for the U.K.’s Secret Intelligence Service known as MI6 — and, as we exclusively reported back in August, she’s also the daughter of Meera Malik, the late CIA agent played by Parminder Nagra in Season 1.

Meera will be looking for answers regarding her assassinated mother’s work and death.

Banerjee’s addition may help to fill the void of the ninth-season departures of cast members Amir Arison and Laura Sohn.

A midseason premiere date for The Blacklist season 10 will be announced later.

What do you think? Are you looking forward to the 10th season return of The Blacklist on NBC?

Been watching the Blacklist since the beginning, and Looking forward to another exiting series with James Spader and the gang..

Watching Blacklist is like reading a book you just can’t put down. Love Binging on Netflix but looking forward to Season 10

I am, indeed. The show has evolved but Spader remains fantastic, as always.

Love the show looking forward to its return. Disappointed to see Laura Sohn returning. She does not fit into show.

Can’t wait been missing this!

I agree with Jan about the long drawn-out relationship with Elizabeth. Personally, I’m glad she’s out out of the show. We will miss Amir! James Spader is wonderful in this show. Please hurry back!

I have always enjoyed The Blacklist. But, I did not enjoy the LONG DRUG OUT STORYLINE, “are they related or are they not?” The whole drawn out ordeal…almost destroyed the entire show.