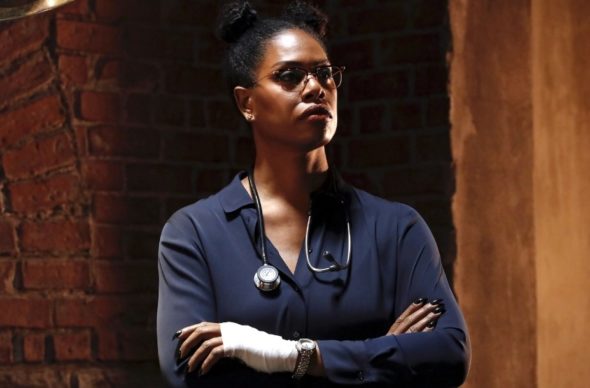 The Blacklist is bringing in a new face who will be familiar to Orange Is the New Black viewers. Laverne Cox will guest star on an episode set for March 12th, per TV Insider. James Spader, Megan Boone, Diego Klattenhoff, Amir Arison, Hisham Tawfiq, Laura Sohn, and Harry Lennix star in the NBC crime thriller series which follows high-profile criminal Raymond “Red” Reddington (Spader) as he helps the FBI bring in wanted criminals.

The following was revealed about Cox’s role on the NBC series:

“She’ll play the episode’s blacklister, Dr. Laken Perillos, a sadistic interrogator who tortures her victims by using unorthodox methods. In the episode, Red (James Spader) and Dembe (Hisham Tawfiq) are in danger when Townsend deploys her.”

Cox can also be seen on Shonda Rhimes’ Netflix series, Inventing Anna. The Blacklist currently airs on Friday nights on NBC and has already been renewed for a ninth season for 2021-22.

What do you think? Are you a fan of The Blacklist on NBC? Do you plan to watch the episode featuring Cox on March 12th?

Laverne Cox is a terrible actor and I hate when they allow guest appearances by terrible actors who ruin awesome shows! Actors should not be allowed to appear because of who they are, but should be allowed to appear because they are talented and do a great job! Laverne’s acting is NOT in the same class as James Spader’s and his fellow castmates! I am happy to hear the Blacklist is being renewed for another season…it is one of the best shows on TV and James Spader is awesome!

Got your email at 7.50 pm approx on March 14 two days after the episode mentioned in your email was shown!!! Not very helpful then. Thanks anyway.

You might consider changing the frequency of your email alerts to daily instead of weekly. If you receive weekly alerts, some of the information may not be as timely by the time you receive it.

Yes, I love The Blacklist, and James Spader. Hope it stays on for many more years.

I love Blacklist! I have watch all seasons 3 times. I pick up new information each time. The show keeps things interesting at every turn. I can’t imagine the show ever being canceled!!!

I need to see this next season. Where is it running. Is it just streaming? or is it regular network? Thanks

Big fan, where is Liz?

I’ve watched and will continue to watch all episodes of Blacklist. James Spader is an amazing actor.

I’ve been watching the Blacklist from day one! I’m hooked on it! I finally got my new husband hooked on it. We watch it ever week. It’s our date night in with pizza and snacks. PLEASE KEEP THE BLACKLIST PLAYING AND STREAMING. WE KEEP WATCHING IT OVER AND OVER. WE LOVE ALL OF THE ACTORS AND ACTRESS AND THE STORE LINE EACH WEEK. KEEP UP THE AMAZING WORK TO ALL OF THE CAST AND CREW. WE KNOW IT ALSO TAKES THE PEOPLE BEHIND THE SCENES TO MAKE AN AMAZING SHOW TOO!!! THANK YOU!

any episode of the Blacklist is a must see for me. I have seen all since the pilot and look forward to the ninth season in 2021/2022

Absoulety !!
I Have been following
Blacklist since it’s Birth.