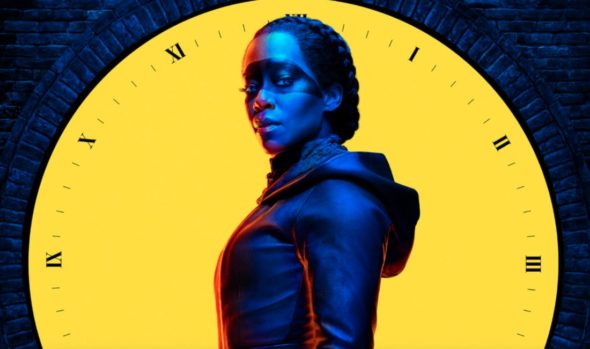 The Watchmen graphic novel series is one of the most iconic and revered series in comic book history. Now, HBO is trying a live-action TV show that picks up years later. Will it also be a big success? Will Watchmen be cancelled or renewed for season two? Stay tuned. *Status update below.

An HBO superhero drama series, Watchmen is loosely based on the 1980s graphic novel series of the same name by Alan Moore and Dave Gibbons. Created and developed by Damon Lindelof, the TV series is set in a world where the original story took place and begins in 2019, 34 years after the comic’s story ended. The show stars Regina King, Don Johnson, Tim Blake Nelson, Louis Gossett Jr., Jessica Camacho, Andrew Howard, Jeremy Irons, Jean Smart, Yahya Abdul-Mateen II, Jacob Ming-Trent, Adelaide Clemens, Frances Fisher, Tom Mison, Sara Vickers, Hong Chau, and James Wolk, with guest Robert Redford. In an alternate version of America, where superheroes are treated like outlaws, President Robert Redford (Redford) has been in office since being elected in 1992. A white supremacy group of Rorschach (an anti-hero from the original story) followers, aka “The Seventh Cavalry,” has committed simultaneous attacks on the houses of police members. As a result, the police conceal their identities behind masks.

What do you think? Do you like the Watchmen TV series on HBO? Should it be cancelled or renewed for a second season?

*1/17/20 update: Executive producer Damon Lindelof isn’t interested in making a second season of Watchmen and HBO doesn’t want to make one without him.

This show give a now meaning for term garbage.

Too many show out there are just about “heroes fighting crime”. This show gives a different take on how things turn out after the “heroes” leave.

Perfect show if you’d like to be preached about racial issues by Damon Lindelof.

Tried to watch it (the one with the elephant, well cuz the critics said it was amazing)…whew what a boring, boring show and I love sci fi and comics, but alas as the Portland Mercury newspaper said in an article titled “Is Watchment the Best Show In America…’make no mistake about it, this is a tv show about race”. Too bad, they can’t just make tv without highly slanted and biased social justice commentary that ignores any dissenting opinion, e.g., like maybe I would prefer that topic to be discussed elsewhere. I bet it is a flop, but apparently 798,000… Read more »

This show is bad. I watched the first episodes and was turned off of the exaggeration of what happened in Tulsa. The show made it seem everyone black was shot. the truth is “some 300 people died, most of them black.” (Smithsonian.com) This number is the total amount including whites so the number of blacks killed was below 300. Not the thousands that the show claims. People are getting tired of being preached to with skewed statistics that support extremist political idelaism. This is why shows like watchmen fail.

Nope, this show will not see a second season. So will Hollywood learn from this race baiting dumpster fire? probably not, they have shown they are more than content with losing money.

Time have moved on friend… finally we see a show that actually engages with some of the things white America has done. Sorry you struggle to cope with it.

Well judging by the ratings it would seem that I am not the only one struggling to cope with garbage. I’ll also take a gander that you think I am white.

24% is reason why bad shows will never be a thing, only for ppl with questionable taste.

Watched the first 5 minutes. The idea we need a show in 2019 exploiting race relations is beyond bad taste. It’s sick & demented. How anyone could possibly think portraying modern day white racists (yes I get the flimsy argument this is an alternate America) slaughtering black men, women & children as entertainment…is just plain inflammatory & insane. They should be ashamed!

The first 5 minutes are not alternate America, the Tulsa massacre was real. That’s exactly why it is necessary.

And who was Governor of Oklahoma when it happened? James B. A. Robertson, a democrat who after the riot ordered an investigation with no one arrested…. So why are conservatives the villains in this show????

Because, the democrats of the south are the conservatives of today. they switched over after LBJ passed the civil rights bill in 1964

Wrong. A greater percentage of Republicans voted for the Civil Rights Act than Democrats. It is a pity that the Democrats control the mainstream media and universities and have you believing nonsense. Black people started becoming Democrats under FDR, but the momentum really picked up under Nixon. https://www.dailysignal.com/2018/12/17/fact-check-more-republicans-voted-for-the-civil-rights-act-as-a-percentage-than-democrats-did/

Did you even read the article you posted? It says exactly what Baja said. Your own link disputes your point.