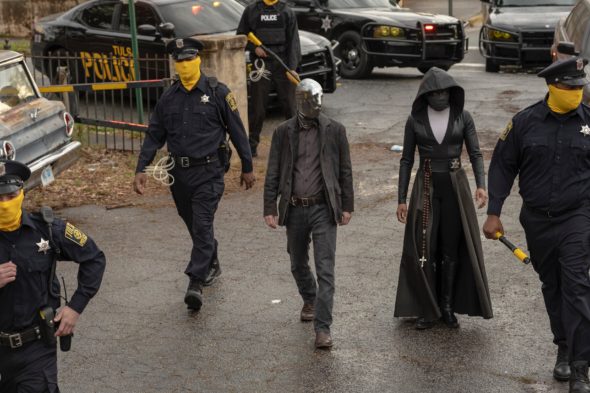 TV show description:
A superhero drama series, Watchmen is loosely based on the 1980s graphic novel series of the same name by Alan Moore and Dave Gibbons. Created and developed by Damon Lindelof, the TV series is set in a world where the original story took place and begins in 2019, 34 years after the comic’s story ended.

In an alternate version of America, where superheroes are treated as outlaws, President Robert Redford (Redford) has been in office since being elected in 1992. A white supremacy group of Rorschach (an anti-hero from the original story) followers, aka “The Seventh Cavalry,” has committed simultaneous attacks on the houses of police members. As a result, the police conceal their identities behind masks.

Detective Angela Abar (King) of Tulsa, Oklahoma, wears two masks; one as a lead detective in The Tulsa Police Force and another as a wife and mother of three. As the series begins, Angela, aka Sister Night, investigates the attempted murder of a fellow officer under the guidance of her friend, Chief of Police Judd Crawford (Johnson). Meanwhile, the Lord of a Country Estate (Irons) receives an anniversary gift from his loyal servants.

Series Finale:
Episode #9 — See How They Fly
Everything ends for real this time.
First aired: December 15, 2019.

What do you think? Do you like the Watchmen TV show on HBO? Do you think it should have been renewed for a second season?